First conceived in China during the 11th century B.C., bells were rung to convey information across large distances. Whether the sound carried an alert, announced a marriage or death, or served as a call to prayer, this metallurgic invention remains a method of both physical and symbolic communication. Since World War II, bells have served as proponents of freedom, peace, and remembrance internationally. At the A.K. Bissell Park in Oak Ridge, Tennessee, the Oak Ridge International Friendship Bell symbolizes the strides for peace and reconciliation between Japan and the United States.

Dr. Ram Uppuluri and his wife, Shigeko, originally hatched the idea to construct a bell for Oak Ridge during a visit to Japan in September 1987. The couple moved to Oak Ridge in 1963, when Ram was hired by the Oak Ridge National Laboratory (ORNL). In 1987, the Uppuluris traveled to Tokaimura for research at the Japan Atomic Energy Institute, where they were awed by the bonshō bell hanging in the nearby Buddhist Gannyu-ji Temple. As Ram inspected the bell, he noted the beneficial value of the bell as a possible tourist location, and began organizing to bring one to Oak Ridge. Although the original venture was not centered around the subject of peace, when Ram submitted the first proposal, he included “Project Peace Bell” as one of the future project names. He hoped the projected tourism value of a massive unique Japanese bonshō bell would make it an attractive project for the town.

Oak Ridge was a town established for the Manhattan Project and the site responsible for enriching the uranium constituting the “Little Boy” atomic bomb. This history eternally entwines the community with atomic bombing of Hiroshima. Many residents have been involved in efforts to strengthen the relationship between Oak Ridge and Japan. As a native of Japan and a resident of Oak Ridge, Shigeko expressed her motivation to establish the Bell: “I don’t want to think about Oak Ridge as just creating a nuclear bomb. This is [for] the peace.”

By 1990, plans were underway for the 50th anniversary celebration of Oak Ridge’s establishment in 1942. The Oak Ridge Community Foundation issued a community contest requesting plans for a new monument associated with the underlying theme of the anniversary: “Born of War, Living for Peace, Growing Through Science.” The proposal drafted by Ethel McDonald and submitted by the Friendship Bell Committee was approved by the Foundation.

The International Friendship Bell Committee spent the early 1990s planning to design, cast, and transport the Bell to Oak Ridge. The Committee also faced opposition from a number of community members. The relief panels featured on the Bell’s outer walls were designed by Oak Ridge resident Suzanna Harris to represent emblematic images of Tennessee and Japan. An additional panel was inspired by the tragedies of war, and simply lists the dates of Pearl Harbor, V-J Day, and when the US dropped the atomic bombs on Japan.

After determining the design, the Uppuluris sought to hire an artisan from Japan to cast the Bell. They commissioned a renowned Japanese bell maker from Kyoto named Sotetsu Iwasawa. Iwasawa visited the intended site in Bissell Park in 1993 and agreed to cast the Bell at a discount, estimated to be around $83,000. Much of the fundraising was managed by the former director of ORNL and International Friendship Bell Committee chair Dr. Alvin Weinberg. The committee procured a grand total of $750,000 from former participants in the Manhattan Project, individuals and companies in Oak Ridge and Japan, and other foundations.

On July 14, 1993, fourteen dedicated members of the Bell project—among them, former director of Oak Ridge National Laboratory Dr. Herman Postma, University of Tennessee professor Dr. Pat Postma, Dr. Weinberg, and the Uppuluris—traveled to Kyoto to participate in the ceremonial bell casting. In her interview on the Voices of the Manhattan Project website, Shigeko recalled the science of creating the perfect bell tone, and subsequent challenge to transport the 8,000-pound bell to Oak Ridge. Shigeko’s brother contacted the shipping faction of the Honda company, who agreed to carry the Bell with the next shipment of cars to Savannah, Georgia, free of charge. From Savannah, the Bell was placed on an empty truck belonging to Dr. Postma’s team at ORNL. When the Bell arrived at Oak Ridge City Hall, Shigeko, the Postmas, and Dr. Weinberg were surprised to uncover 400 replicas of the larger Bell. Isawawa had crafted extra bells to be sold to cover the cost of the original pavilion.

The International Friendship Bell was officially dedicated on May 3-4, 1996, at A.K. Bissell Park, but not without controversy. In what researcher Ted Lollis identifies as the “bell wars,” there were three distinct moments of opposition to the bell. As early as 1991, the International Friendship Bell Committee faced resistance based on anti-Japanese attitudes, using taxpayer money to fund the construction, and debate over the meaning of the Bell.

Some residents of Oak Ridge interpreted the Bell as an apology for the destruction of Hiroshima. They did not believe that there was a need to apologize, especially in the face of the atrocities committed by the Japanese during World War II. These objections were reignited once construction of the pavilion began in 1995, although concern shifted to the anticipated noise created by ringing the Bell. A compromise written into the city ordinance mandated that the Bell could be rung anytime with a rubber mallet, and limited the use of the suspended wooden striker to three times daily between 6:00-6:15pm.

Additionally, opponents contested the religious connotations of the traditional Buddhist bell’s placement on secular property. A World War II veteran and Oak Ridge resident filed a lawsuit in 1998 asserting the Bell violated the separation of church and state. While the district courts agreed that the Friendship Bell was based on a Buddhist model, the court ruled that the panels and dates on the Bell removed the risk of any religious implications.

The city ordinance limiting the Bell’s usage lasted until May 7, 2001, when an eighth grader, Elise Campbell, submitted a request to remove the restrictions. This appeal prompted the City Council to change the ordinance and the Bell has since served as a gathering site for mourning, celebration, and remembrance.

The Friendship Bell encourages the public to interpret and interact with the meaning of the site through a variety of ways. Visitors actively engage with the message of reconciliation and healing by ringing the Bell or organizing events around the Pavilion. The Bell has overseen worship services, weddings, birthday celebrations, and peace vigils—as well as gatherings of grief-stricken community members to mourn the events of September 11, 2001. 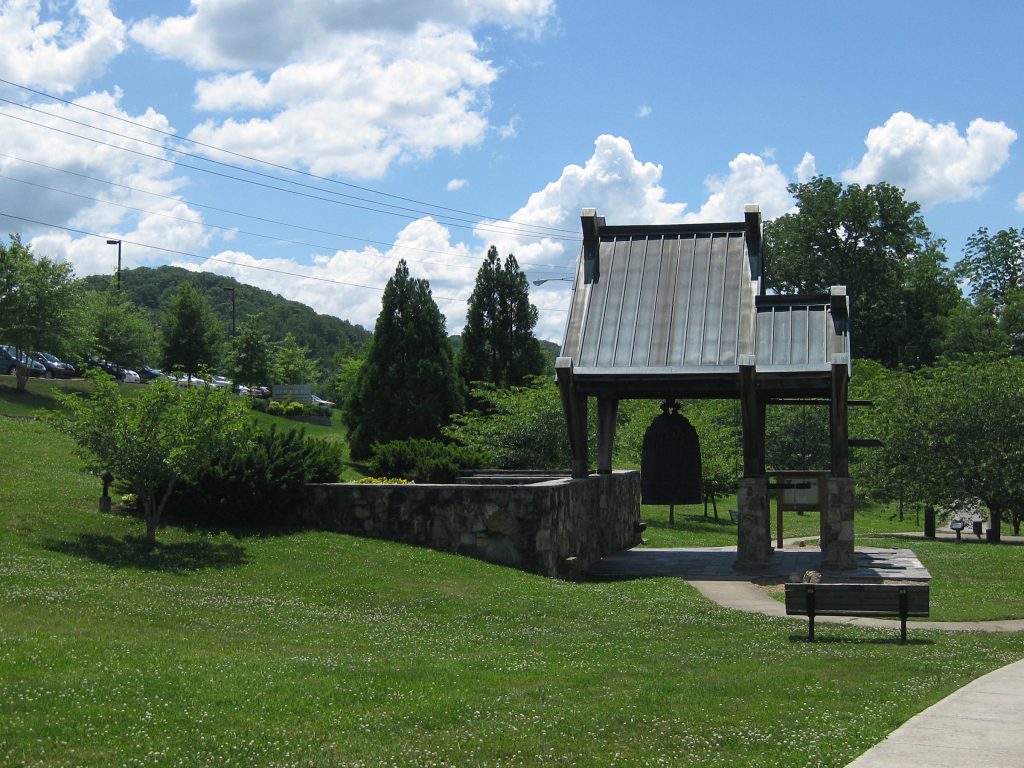 Between 2014 and 2018, the Friendship Bell sat without shelter after structural disrepair led to the demolition of the original Japanese-style bell house. To replace the old bell house, the Bell Committee championed the construction of a new Peace Pavilion to accommodate the Bell and future events. Designed by architect Ziad Demian, the new Pavilion is intended to provide a more visible and accessible location to experience and reflect on the Friendship Bell. The Peace Pavilion was dedicated on September 20, 2018, in its new location.

The Oak Ridge International Friendship Bell is among a handful of symbolic bells constructed in the United States to advocate peace. The World Peace Bell in Kentucky and the Sapporo Friendship Bell in Oregon were similarly constructed to raise awareness of the global movement for world peace and improved relations with Pacific nations. The US-Japan relationship has drastically improved since the re-establishment of diplomatic relations in 1952, and was reinvigorated in 2015 by President Obama’s and Prime Minister Abe’s visits between the two countries and the renegotiation of the U.S.-Japanese Defense Guidelines. The United States and Japan continue to collaborate on a variety of global issues, scientific innovations, and nuclear nonproliferation. The four-ton bronze International Friendship Bell hanging in Bissell Park represents the legacy of US-Japan relations and serves as a reminder of the advances made in friendship and reconciliation since 1945.