The majestic Columbia River is a source of beauty and power for Washington, Oregon, and Canada.

Narrator: The Columbia River drains a 259,000 square mile basin that includes territory in seven states and one Canadian province. The river flows for more than 1,200 miles, from the base of the Canadian Rockies in southeastern British Columbia to the Pacific Ocean at Astoria, Oregon, and Ilwaco, Washington.

The Columbia River basin is the most hydroelectrically developed river system in the world, with more than 400 dams. The generation of hydroelectric power in the area led to significant agricultural development as well as playing a major role in the government selection of the Hanford site for the B Reactor. However, the building of dams has also contributed to major declines in fish populations, especially salmon. 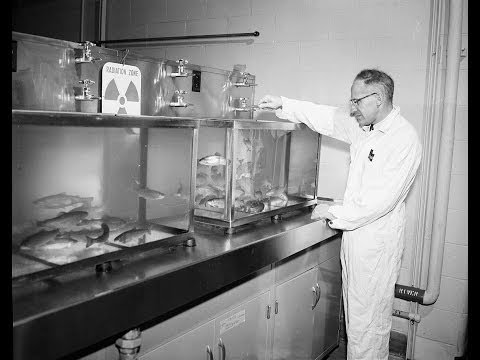 Hanford engineer Hank Kosmata explains that the water and power generated by the Columbia River made the Hanford site a compelling choice.

Narrator: Several locations were considered for the B Reactor, but Hanford quickly floated to the top of the list because a river ran past it.

Hank Kosmata: That is why the site was chosen, because of this immense quantity of clean water from the Columbia River. The site had to have a large supply of water because they were going to use the water to cool the reactor. The Columbia River also was generating power at two new dams, Coulee upstream and Bonneville downstream from Hanford.

Narrator: Even the clear water of the Columbia needed additional filtering, since the tiniest particles could build up over time or become radioactive as they passed through the reactor.  Equally as important as the purity of the water going into the reactor was the quality of the water being returned to the Columbia, as documented in newsreels of the day.

Newsreel: At Hanford, biologists study the effects of radioactivity on fish since Columbia River water is pumped through the plant. To safeguard Washington’s flourishing fish industry, 25,000 trout and salmon are hatched each year and exposed to water contaminated with radioactivity.  This is only one example of precautions that go on endlessly. In this case, there is not enough radioactivity to harm the fish or persons eating them.

Narrator: The groundbreaking water purification system designed for Hanford by DuPont engineers was so good that it soon became the industry standard for municipal water supplies across the country. Water quality and safety standards at Hanford were so stringent that workers were confident they were safe.

Hank Kosmata: Obviously, we had radiation surrounding us all the time. But the impact on the environment was always very carefully monitored. I always felt extremely safe here.
Narrator: Once surrounded by dozens of structures and miles of pipe, today the B Reactor stands alone. But as a lasting reminder, a river still runs past it. 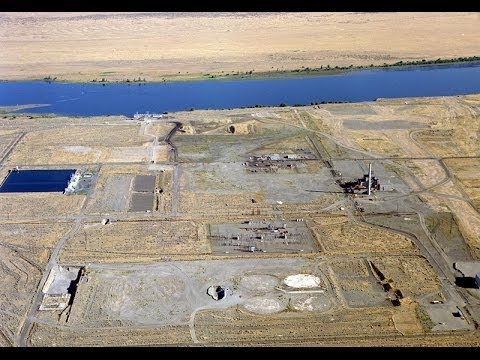 This vignette follows the path of the Columbia River water as it passes through treatment plants to cool Hanford’s B Reactor and then returns to the Columbia.

Narrator: From deep beneath the surface of the Columbia River, the river pump house’s ten mighty pumps moved water to the nearby reservoir. Five hundred feet square, this concrete reservoir could hold 25 million gallons of water, enough to fill 18 Olympic-sized pools.

Next stop was the filter plant. For even though the Columbia was remarkably clean, water used to cool the reactor had to be absolutely pure, containing no more impurities than two parts per billion. At the chemical pump house and water lab, water was treated to minimize corrosion and any buildups inside the reactor. At the deaeration facility, water cascaded down huge columns to remove gases, especially carbon dioxide and oxygen.

The process pump house held ten massive pumps that used both electric and steam power to move the treated water first to the pipe gallery, then through the reactor, on to the retention basin, and finally back to the river. Two elevated storage tanks held enough water to cool the reactor for two hours in an emergency – enough time to bring in water from other sources. A large capacity export water line provided a direct source of untreated water that would also serve to cool the reactor in an emergency.
The B Reactor building was the heart of the project. The elaborate pipe system inside kept the reactor cool, while its 200 foot ventilation stack dispersed air from inside the building.  A few particles would inevitably become radioactive as water passed through the reactor, so the water spent 3 to 4 hours in a retention basin, allowing radioactive elements to decay. Then the water rejoined the Columbia, its mission successfully accomplished. 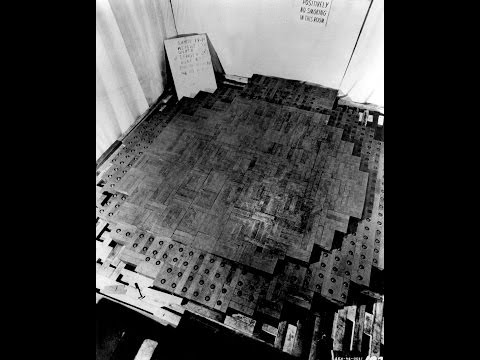 Narrator: The world’s first controlled chain nuclear reaction took place beneath the bleachers of Stagg Field at the University of Chicago. Under the direction of Enrico Fermi, lumps of uranium were dropped into holes in graphite blocks.

Richard Rhodes: Fermi’s first experiments towards building a functioning nuclear reactor involved using blocks of graphite. It is mostly carbon, and it is a very good moderator.  To make a nuclear reactor you need to slow the neutrons down. You cannot use the neutron as it comes off a fission reaction, it is going too fast.  In a bomb, you want fast neutrons, but in a reactor you want them slowed down.

Narrator: But even slowed down, a nuclear chain reaction produced incredible amounts of heat.  Without a way to cool the Chicago Pile, its only use was for demonstration.

Hank Kosmata: It was a very short period of time between the demonstration of the chain reaction by Fermi and the design of this reactor. So people were learning as they went. They were continuing to experiment at Chicago, where the first chain reaction was done. There was really a team of people, the scientists at Chicago and the DuPont engineers, working together to build this first of a kind reactor.

Narrator: As a moderator, the Germans had abandoned graphite in favor of heavy water. But the American effort followed Fermi’s lead, and stuck with graphite.

Gene Woodruff: The advantage graphite had there was, you could build a reactor out of graphite, then the graphite could support the fuel and all the cooling tubes and everything else. Heavy water was just water. You had to introduce all kinds of other vessels to contain the water and contain the fuels.

Narrator: The challenge was how to cool the reactor. The Columbia River offered the most accessible solution: water. But even water can hamper a nuclear chain reaction. So the mission was to use as little water as possible, which meant moving it through the reactor at great speed.  This is where Hanford’s maze of pipes and armies of pumps came into play. As if shot from a pistol, water was sent screaming through the reactor, traveling the full 40 feet, front to rear, in only two seconds. Too cool.

Read Transcript
Quick Fact:
The water and power generated by the Columbia River made the Hanford site a compelling choice for the Manhattan Project's plutonium production site.