How It Was Built

Ranger Home > Know Before you Go > How it was Built

How It Was Built 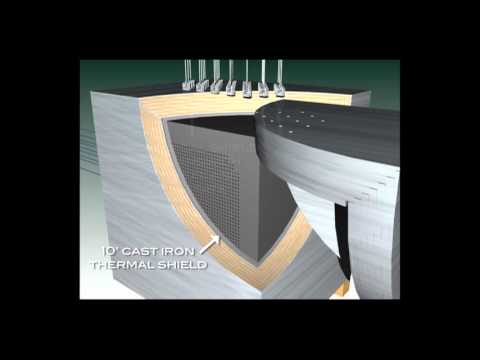 Hank Kosmata, an engineer and member of the B Reactor Museum Association, explains how the historic B Reactor was assembled and how fuel was loaded into the reactor.

Hank Kosmata: Reactor assembly. The nitrogen in normal air would absorb neutrons, so the atmosphere inside the reactor is helium. The helium distribution piping is buried in the massive 23-foot-thick concrete base foundation for the reactor. At the top ends of the helium piping system, the ductwork that will direct the helium into the graphite stack can be seen. On top of the base concrete, a quarter-inch steel plate is laid, and it will connect to other steel lining of the insides of the shields to form the airtight barrier for the helium. The next material laid down is a 10-inch thermal shield of cast iron, which will also be added between the graphite stack and the top and side biological shields.

The front and top biological shields with penetrations for the process tubes were prefabricated in northwest shipyards as four-foot cubes weighing ten tons. The dimensional tolerances for these B blocks were incredibly tight to allow them to be stacked 35 feet high and still be able to precisely align the front face top tube holes with the corresponding holes in the graphite, and then the holes in the rear block.

While the shield walls are being completed, the enormous piping system to deliver the required 30,000 gallons-per-minute of cooling water was put in place. The water from the pump house next to the reactor building arrives at the reactor front face through two 20-inch diameter risers on each side. Four-inch diameter cross setter pipes connect to the risers and run under each of the 46 rows of process tubes. Inside the shield box, the 75,000 graphite blocks are now laid down in alternate layers, one layer side-to-side and the next layer front-to-back.

The bored tube blocks are laid down to match the holes in the front and rear shields. There is about 1800 tons of graphite in the 36x36x28-foot structure. When the graphite is in place, the 2,004 44-foot-long aluminum process tubes are pushed through the front shields, through the graphite blocks and then through the rear shields. Nozzles have been attached to the outside shield faces and the process tubes are sealed to the inner diameter of the nozzles. A small tube called a pigtail connects the cross setter to each nozzle. The water flow for each process tube can now flow from the riser to cross setter to nozzle and into the process tube. The top shields are now put in place.

The 29 safety rods are now moved into position. The rods hang above shielded fittings in the top shield, and if needed can be dropped through holes in the shields and the graphite into the reactor. The nine control rods are also installed on the left side of the reactor, and the reactor is ready for fuel loading.

Helium flow. The helium enters the reactor at the lower edge of the front face of the graphite stack. The tube blocks are chamfered, or beveled, along each of the four-foot edges to provide a small pathway for the helium to circulate from front to rear of the stack. And then it exits the reactor through the duct piping at the bottom of the rear face of the graphite stack. The small amount of heat picked up by the helium is removed by external heat exchangers before the helium is returned to the reactor.

Biological and thermal shields. A 10-inch cast iron thermal shield surrounds the graphite stack. The purpose of the thermal shield is to reduce the flow of gamma rays and to capture thermal neutrons before they reach the environment outside the reactor. The next shield barrier is a 50-inch sandwich of steel and Masonite. The hydrogen atoms in the Masonite slow down escaping fast neutrons, and the steel captures the remaining slow neutrons and gamma rays. This combined shield arrangement has the same shielding capacity of 15 feet of concrete, and makes it possible for workers to safely be in the work area when the reactor is operating. The rear face remains radioactive during operation, because of the activity in the cooling water leaving the reactor, but returns to a safe level once the reactor shuts down.

Cooling water. The cooling water for the reactor is piped from the pump house building just outside the reactor building. The 30,000 gallons-per-minute of treated Columbia River water reaches the reactor through two 20-inch diameter pipes on each side of the front face. The water then passes through 4-inch cross setter piping under each tube row, and then through tubes called pigtails to reach the process tube nozzles and into the process tubes. The exit flow is essentially the same, reaching a 36-inch stand pipe on each side of the rear face, and then up to a crossover pipe, which takes the water to a downcomer pipe and then out to a retention basin and then to the river. As shown, when the control rods are in the reactor, the cooling water picks up very little heat. But when the rods are withdrawn and the reactor increases in power level, the water is heated up to 150 to 160 degrees.

Fuel charge discharge. To load a fuel column, the reactor is shut down, the water in the tube row of the tubes to be charged is reduced to a trickle flow, and nozzle caps on both ends of the tubes are removed. A fuel column contains 32 fuel elements with aluminum spacer pieces on each end of the column. The spacer pieces are hollow cylinders, which position the fuel elements in the center 23 feet of the 28-foot long graphite block.

When a fresh fuel column is put into place, it pushes the irradiated column out of the process tube, and the fuel elements and spacer pieces fall to an inclined mat on the rear of the reactor. The mat is padded to cushion the fall of the fuel elements, and they end up at the bottom of a 20-foot pool of water. The fuel elements are then separated from the spacers using long tongs through the 20 foot of shielding water, and placed into buckets and moved to storage areas in the pool. After a period of time to allow reduction in radioactivity, the buckets are moved to a shielded cask, which is covered with a shielding lid and then moved by overhead cranes to a transport cask car, which then transports the fuel to a chemical separation plant a few miles away on the Hanford reservation.

To return to the “Know Before You Go” tour, click the “Back to Tour” button at the top of this page.

Read Transcript
Quick Fact:
Explore how the historic B Reactor was assembled and how fuel was loaded into the reactor.