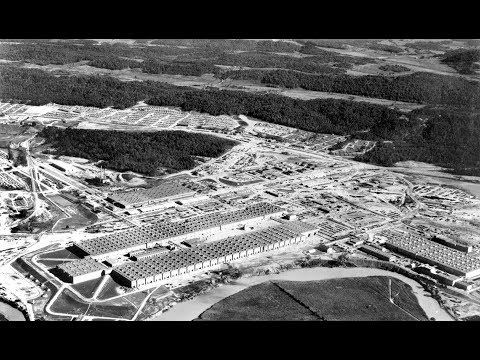 Ray Smith: It is a continuous operation, so it takes fewer people. In fact, you can operate K-25 on a tenth of what it costs to operate Y-12. That is one of the reasons that they shifted to that process.

As you push this material through in any one-process step, that 235 will go through just a little faster than the 238. In each of those 3,000 stages, you will begin to accumulate a little bit more and a little higher percentage of the uranium 235. This is a continuous operation process. It pumps the material in gaseous form through a barrier material that has small holes. It accumulates a higher percentage of 235.

Narrator: Manhattan Project veteran Donald Trauger worked on the design of the barrier for K-25. This allowed the U-235 isotope to pass through more easily than the stable isotope U-238.

Donald Trauger: I went to the Manhattan Project in New York at Columbia University, and found that I was to work with the barrier, which was the separating membrane which is the key to the process. The light element will diffuse through a very fine, porous barrier a little bit faster than the uranium-238, which would not fission.

But of course, it required large areas of barrier and multiple stages to increase the concentration of uranium-235, the fissionable isotope, from seven-tenths of one percent, as it is in nature, to above ninety percent, as was needed for a weapon.

That was a major task and it was the key element in what became the K-25 plant.

Physicist Philip Abelson was the first person to make uranium hexaflouride, a gaseous compound used to separate the fissionable uranium-235 from the heavier uranium-238.

Narrator: The principle behind separating uranium isotopes really is rather simple: molecules of a lighter isotope would pass through a porous barrier more readily than those of a heavier isotope. The fissionable isotope of uranium, U-235, the kind that works in a bomb, is a tiny bit lighter than U-238, the more common, more stable isotope. To create highly enriched uranium for a bomb, scientists needed a gaseous compound that could carry the uranium isotopes through a separation process with a series of barriers. Phil Abelson came up with an innovative process for creating large quantities of the gas, uranium hexafluoride, that could travel through the barriers.

Philip Abelson: I ran a few solutions of the uranium, and I could see that water solutions of the uranium were never going to work. So I looked around to see what kind of a chemical substance of uranium might there be that was stable, and which would be a liquid itself. I saw that uranium hexafluoride might fit this. At that time, only a few grams of uranium hexafluoride had ever been made. 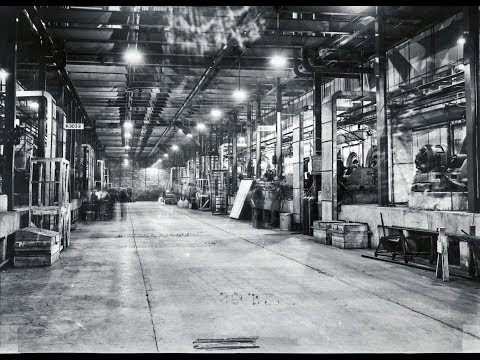 The K-25 plant was a mile long, the largest roofed building in the world at the time. Workers had to use bicycles to get around.

Narrator: Larry O’Rourke served in the Army’s Special Engineer Detachment and worked on the research and development of the K-25 barrier during the Manhattan Project.

Larry O’Rourke: I think it’s rather well known that this K-25 plant was a “U”-shaped building. Various utilities and the like were on the ground floor. And the second floor was the process floor, where there were stages of decreasing size.

Narrator: Joe Dykstra, a chemist, and Herman Snyder, a member of the Special Engineer Detachment, remember how operators at K-25 had to use bicycles to keep up with their jobs in the enormous building.

Joe Dykstra: I had been assigned that whole K-25 “U” building, mile-long building. And I had one foreman on each shift and I had five operators operating that.

Herman Snyder: We’d run around on that operating floor on bicycles. It was a big building. My particular job as an engineer, and later on as supervisor, was to get to a lot of places in a hurry. Not because we were always in trouble, but just to take care of things. We did it on bicycles. 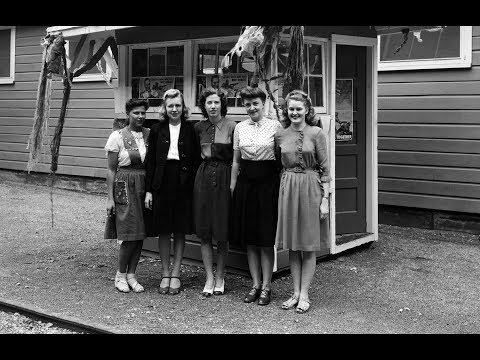 Colleen Black was one of 13,000 workers who lived at the construction camp in “Happy Valley,” across from the K-25 plant. She recalls her job as a leak detector at K-25.

Narrator: At the age of eighteen, Colleen Black and her family moved to Oak Ridge to work on the project. Colleen was hired as a leak detector, testing for pinhole leaks in the hundreds of miles of pipes that were being installed in K-25. She describes the secrecy of her work and how she had to abandon skirts and dresses for pants.

Colleen Black: K-25 was the big U-building and we did not know what was inside, but they were still building it when I was there. I walked to work, and it was the four to twelve shift at the time, although they had three shifts going around the clock all the time.

They put me in the leak-testing department, and I would see all these big pipes come in and we would test them for leaks in the well. We did not know where they were going or what they were going to do. We did not ask, because all the posters said, “Do Not Tell.” Everything was a secret.

Some of the pipes were huge and you would have to get up and climb on them. The women who worked there, when they came in for the jobs, they wore skirts like everybody else, dresses. We soon learned you wore pants, but that was not very ladylike in those days, in the early ‘40s. You notice all the pictures, the women had on short dresses.

Read Transcript
Quick Fact:
The K-25 Plant used the gaseous diffusion process to separate the fissile uranium-235 from uranium-238. "K-25" comes from Kellex Corporation, the contractor that designed and built the plant, and uranium-235, often shortened to "25." A mile-long, U-shaped building, the K-25 plant was the world’s largest roofed building at the time.