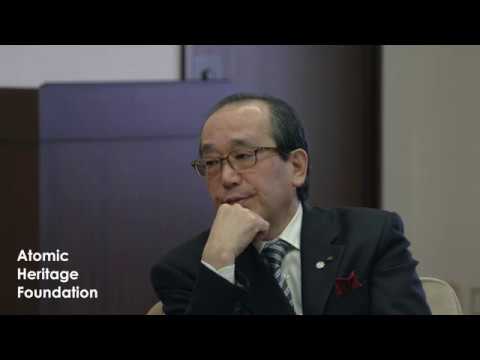 Kazumi Matsui is the mayor of Hiroshima, Japan. He serves as the president of Mayors for Peace, an organization that brings together 7,700 cities across the globe with the goal of creating a world without nuclear weapons. In this interview, Mayor Matsui explains his call for the abolition of nuclear weapons. He expresses his concern about the collapse of the INF [Intermediate-Range Nuclear Forces] Treaty between the United States and Russia, and urges world leaders and young people to visit Hiroshima and learn about the atomic bombing.

Kazumi Matsui [TR]: First, I would like to extend my warmest welcome to you for visiting our city for the first time. Thank you very much for coming to our city hall today. I heard that yesterday you visited the Peace Memorial Museum and now I am wondering what kind of impressions you had there. First, I would like to express my gratitude for your supporting our city’s efforts regarding the exhibits and developments of the Manhattan Project National Historical Park, through understanding the spirit of Hiroshima which is our wish for the abolition of nuclear weapons and lasting world peace. I would like to continue good relations with you.

Japan and the United States take different stances over the motives for the development of atomic bombs. However, instead of pursuing which side is to blame, we would like to work with those who share in our spirit of Hiroshima by collecting the wisdom of many people from civil society so that such a tragedy of claiming as many as 140,000 innocent citizens’ lives will never be repeated. I believe that President [Cindy] Kelly [of the Atomic Heritage Foundation] shares in our spirit, and I hope this visit will help reinforce your initiatives.

Two days ago, I visited the embassies of the United States and Russia in Tokyo. At that time, I delivered letters of request addressed to their presidents regarding the Intermediate-Range Nuclear Forces Treaty. Both the Russian ambassador and a representative of the US embassy blamed the collapse of the INF Treaty on each other.

I told them that we must acknowledge that the collapse of the INF Treaty will create a situation in which the nuclear buttons in US and Russia, or possibly, in other nuclear weapons states, might be pushed mistakenly. I, as the Mayor of Hiroshima, and also the head of Mayors for Peace, encouraged them to embrace the concept of preventing such a situation from happening with their intelligence.

I told them to think what they should do for our future, taking into consideration the consensus of civil society, so that such a tragedy will never happen again.

That is why we have been requesting that the heads of state of the US, Russia, and other nations visit the A-bombed cities. I believe that if they see the reality of the atomic bombing here, they will understand such a tragedy should never happen again. So the City of Hiroshima makes efforts to preserve the facts of the atomic bombing and to convey what happened here to future generations. In that regard, I would like to ask for your ongoing support.

Translator: We would like to ask Ms. Kelly to say a few words. We have heard that you visited Japan this time to collect interviews to publicize them as peace education materials for use around the world. On this occasion, please ask the mayor any questions you’ve prepared.

Cindy Kelly: First, I want to say how honored I am to be here. I am so impressed with the work that you have done personally as a world leader on this issue. And to have just met with both the embassies in Russia and the United States, kind of broker a peace, kind of “Don’t move so fast to rip up the INF, the Intermediate–Range Nuclear Treaty, but think about the long-term implications for humanity” is such an important message. You have been so successful, you and Mayor [Tomihisa] Taue in Nagasaki carrying the Mayors for Peace forward all these years with 7,700 mayors. I know that in Boston in April, you had a standing ovation from the United States mayors.

There is a lot of support for your message in the United States for peace. Having visited yesterday for the first time your Peace Memorial Museum and walked the grounds, it is very moving. You have done an excellent job in conveying the human tragedy. You can’t help but be moved by that experience. I want to thank you and all of those who have worked with you to try to create this memorial and to help generations to come to remember and understand the depths of this tragedy. So it is united in our efforts to help people understand, to educate the next generation of students and young people, as well as the general public, about what happened as a result of dropping a nuclear weapon. If you think about the size of Hiroshima, which the bomb, you know, is it 15 kilotons, it’s a baby weapon—

Kelly: Compared to the hydrogen bombs and the other bombs that have been developed since then. People need to grasp the consequences of acting in their so-called national interest. It is not in anyone’s national interest to use such a weapon ever. So it is a difficult issue. There are a lot of people who can’t – don’t want to think about it. It’s easy after nearly 75 years for people to forget. But thanks to your efforts, it’s very important to remind people and remember what happened here. So thank you.

Matsui [TR]: I totally agree with what you talked about. It is very, very important to convey what happened here in 1945 to the next generation. Talking about our city’s initiatives, on the 25th of April this year, we will reopen the main building of the Peace Memorial Museum. We have done renovations with the building. That’s because many people are forgetting about what happened here. The memory of the atomic bombing is fading. I hope that a lot of people, especially young people, will understand such a tragedy should never happen again. I hope that many people will visit our city to take to heart the reality of the atomic bombing.

We say that natural disasters happen when they are least expected. In Hiroshima, five years ago, we had a landslide disaster. Also, last year, another large-scale landslide happened here. I think that not only natural disasters, but also man-made disasters, such as wars and nuclear explosions, might happen when we least expect them. The best way to prevent such disasters from happening is the abolition of nuclear weapons. Until we can achieve that goal, we will continue to raise the awareness of the civil society to prevent such disasters from happening.

Kelly: I agree. Very well said. We definitely need to remember what happens when nuclear weapons are used. The results are nothing but disastrous. Nobody wins. As our President [Ronald] Reagan and the Soviet President Gorbachev said in the 1980s, no war can ever be fought with nuclear weapons and no war can ever be won with nuclear weapons. It seems in thirty-some years, we have forgotten perhaps. Forgotten, and people need to be reminded that building more arsenals of weapons does not lead to greater security. Your work is very important, and the remembrance of what happened in Hiroshima and Nagasaki is vital. We, the Atomic Heritage Foundation, want to work with you and your colleagues to help create programs to educate young people in the United States and around the world online about what happened.

Kazumi Matsui: To that end, I think it is important to increase the membership of Mayors for Peace. As you said, the number of member cities is now 7,700 but it is increasing every day. We would like to encourage cities, especially in the nuclear weapons states, to join us at Mayors for Peace. I would like to ask for your continued support for our initiative. Thank you.

I think the mayor did an excellent job of answering the questions that I had. [We] just want to emphasize again how much we want to learn from Hiroshima and Nagasaki and use that as a building block for education and outreach to the public, to students in the United States, who may not appreciate this, to educate them in high school and university, but also to reach audiences online. The Atomic Heritage Foundation has a website that has many resources. We have 500 interviews with Manhattan Project scientists and at the end of this trip, we will have two interviews with hibakusha [atomic bomb survivors] but that’s only two. We need to link to your collections here in Hiroshima and Nagasaki, perhaps, so that it is easy for people to see and listen to those accounts and understand what happened after the bombs were dropped and what the long-term effects are of nuclear weapons.

Kazumi Matsui: I think it’s important to convey what happened here and in Nagasaki to the next generation. Also, the long-term effects of radiation should be conveyed to many people. We are trying to create a movement to awaken people’s reason to encourage them to pursue an ideal world. So, in that regard, I would like to ask for your support.