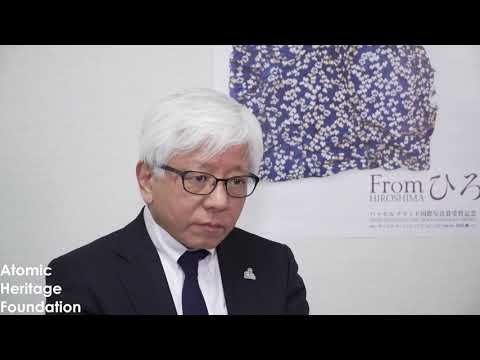 Kenji Shiga is the former director of the Hiroshima Peace Memorial Museum. In this interview, Mr. Shiga explains the museum’s mission to convey the history of the Hiroshima atomic bombing, and the importance of remembering that event after all the survivors have passed. He recalls the 1995 Smithsonian controversy over the Enola Gay and describes the role of museums in fostering open discussions about the past.

Cindy Kelly:  This is Cindy Kelly, Atomic Heritage Foundation. It is February 14, 2019. I am in Hiroshima, Japan. I have with me Dr. [Kenji] Shiga. Why don’t you start by saying your full name and spelling it?

Kelly:  Great. Thank you. This is just a chance to learn more about yourself and your profession and what you do now with the museum.

Shiga [Tr]: The Peace Memorial Museum opened in 1955 and the materials displayed here at the museum are based on the materials that were collected by Mr. Shogo Nagaoka immediately after the bombing. He was the first and former director of the museum. I heard that he was a geologist, and he realized the abnormality of the bombing because of the surface of a stone. He thought it strange and he started collecting materials on this ground. For the past 64 years this museum has shown the consequences of the atomic bombing to the visitors, and what the atomic bomb brought to the people and the city of Hiroshima. Especially with—we have told the story to the young people. I assumed the position of the director of this museum in April 2013.

Also, our museum has been in collaboration with overseas museums themed on the memory of what happened before. I, myself, visited several museums overseas. The examples are the Auschwitz-Birkenau [Memorial and] Museum and the museum in Dresden [Bundeswehr Military History Museum], and the Jewish Museum in Berlin, and also 9/11 [Memorial and] Museum in the United States. I’m determined to have a strong network with those museums from now on.

Kelly:  Oh, very interesting. What kind of things have you observed about those other museums? What are some of the ideas that you’re trying to incorporate in the Hiroshima Museum that you may have borrowed or been inspired by these other examples?

Shiga [Tr]: I could learn other methods to preserve the materials that have been collected at this museum. How to preserve those things to be shown for the many visitors, and also, I could learn how to tell the young people what happened here in Hiroshima.

Kelly:  How do young people react to these stories and exhibits? What kind of response? Are you happy with how the young people have responded?

Shiga [Tr]: There are many types of reactions from them, so I can’t say it in a word. But many of them are very shocked by those exhibits.

Kelly:  Are there schools that bring the children here, and are there programs that the museum might offer for the classroom?

Shiga [Tr]: The main program is for the teacher to bring their children here to this museum. There are not so many programs, but there are some programs that are organized by this museum.

Kelly:  That’s great. Do you have relationships with survivors who live in other countries?

Kelly:  Right. There are survivors from a map I saw, that are throughout Japan. There’s some who survived Hiroshima and live elsewhere, in other parts of Japan.

Kelly:  Keiko Ogura, who spoke earlier today—a survivor—talked about how she didn’t want to talk about her experiences for 60 years—for a long, long time. But she finds that it’s very helpful to her. It makes her more peaceful, or she doesn’t have as many nightmares once she began to share. I wonder if there—you might expect more survivors in their old age to begin to contact the museum and share their stories?

Kelly:  The Mayors for Peace, obviously, Mayor [Kazumi] Matsui and Mayor [Tomihisa] Taue from Nagasaki, have been inviting heads of state and other mayors to come to Hiroshima. Have you noticed an increasing number of government officials coming to visit the museum in the last decade or so?

Shiga [Tr]: Every time world dignitaries visit our city, the director or the vice director will provide a tour inside the museum.

Shiga [Tr]: Since assuming the position of the director in 2013, the number of requests from the city government to provide a tour inside the museum has been increasing. Especially after the visit of then sitting President [Barack] Obama.

Kelly:  What advice do you have for people in the United States with respect to better understanding the perspective of people in Hiroshima?

Shiga [Tr]: I would like to talk about what I felt after President Obama visited this museum. When I heard the news that President Obama would visit our museum, the news reminded me of the Smithsonian incident that happened from 1993 to 1995. It was in a program to exhibit the B-29 bomber, Enola Gay, the reproduced one with the explanation of what happened here in Hiroshima. We provided those materials to the Smithsonian [National Air and Space] museum. But finally, because of the opposition from the American government and also the veterans, they decided just to exhibit the Enola Gay, the model of Enola Gay.

When I heard the news, I thought at the time, “Oh, they thought it’s not necessary to understand what happened in Hiroshima.”

But President Obama visited this museum and saw what happened on that day and after, and he returned to America. I believe that due to his visit to our city, it became easier for the American people to visit our city and see what happened here 75 years ago.

It is my request that – we hope that all the people should see what happened in Hiroshima in 1945.

Kelly:  That was a very important visit. Were you aware of the U.S. Ambassador to Japan, John Roos, or did you know him?

Shiga [Tr]: Ambassador Roos visited Hiroshima several times, but at that time, Mr. Shiga was not the director of this museum.

Kelly:  Well, I just understand that Mr. Roos was very instrumental in kind of paving the way for Obama’s visit. Working behind the scenes with the State Department in the United States, who might have not been sure that it was the right thing to do. At any rate, I just heard very good things about his role.

I believe that all the museums themed on the memory of the past have the same opinion, that everyone should see the history, see what happened in the past. I hope that not only those museums related to the memory of the past, but also other museums all around the world, share the common mindset. Because of that, I want to have open discussions about things. I want to talk about those things with other people openly.

Kelly:  That’s great. As a history major, I am distressed that the trend in education today, at least in some places, is to become more technical. You know, people ask, “Well, where are the jobs in history?”

Shiga [Tr]: The same thing in Japan, too. Our museum will keep asking the visitors for their opinions.

We will ask the visitors to think, “What happened by the bombing and why was it caused?”

Kelly:  One of the things we share—that is the United States and Japan—is that the history is very contested. You mentioned the Enola Gay exhibit. The makers of that exhibit had to back down and not display because of the political anger that it generated—the controversies.

How do you deal with controversies when you’re trying to exhibit this history? How do you figure out a path that will not anger one side or the other? Or do you just throw it all in there and hope that people will see that you’re—how do you address that issue?

Shiga [Tr]: Myself, also—I experienced that kind of thing in a small scale. The exhibit I planned was opposed by other people. But I can say that open discussion is the only way to solve problems.