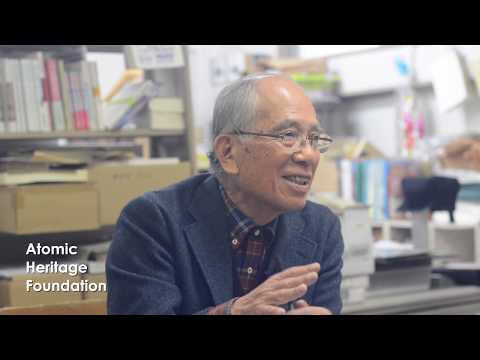 Mitsugi Moriguchi, born in Nagasaki, Japan, is a hibakusha (atomic bomb survivor). He was nine years old when the US dropped the “Fat Man” bomb on Nagasaki on August 9, 1945. As a member of the Nagasaki Testimonial Society, Moriguchi collects the stories of other hibakusha. His work with other members of the Nagasaki Testimonial Society culminated in the publication of the book, Voices of the A-Bomb Survivors: Nagasaki, in 2009. In 2018, he visited Hanford Site, where the plutonium for the Fat Man bomb was produced.

In this interview, Moriguchi discusses how he survived, how his sister suffered from cancer and eventually died years after the bombing, and how some of his brother’s children were born with birth defects. He also reflects on his visits to Dayton, Ohio, where the B-29 that carried the bomb, Bockscar, is exhibited, and Hanford’s B Reactor.

Kelly: This is wonderful. This is February 20, 2019. I’m Cindy Kelly. I’m in Nagasaki, Japan and I have with me a distinguished guest. I want you to first start by saying and spelling your name.

Last year, I visited Hanford. In Hanford, there is an atomic reactor, which produced plutonium. Nagasaki’s atomic bomb was made by the material of plutonium. In Chicago University [University of Chicago], the scientists found plutonium made from uranium. And that bomb was dropped on Nagasaki 74 years ago, and there was big suffering and damage.

I was, at that time, nine years old and third year of primary school. Fortunately, my younger brother and I were evacuated at that time. So, we were lucky, fortunately.

Three days before the bombing, my younger brother and I were evacuated. I was fortunate.

Later, my sister died. She was young, a high school student [at the time of the bombing; she later passed away in her 30s]. And she had suffered from cancer all over her body.

My brother survived and he was able to get married. He was married, but his baby or children were – the first baby had no shape. And the second baby had no arms or legs and died.

The ABCC, Atomic Bomb Casualty Commission, ABCC, the American Commission. Do you know?

Moriguchi [Tr.]: The staff of the ABCC came to our house to check that the babies, you know, had effects of the atomic bomb or not.

I was very angry at the ABCC, and said, “Get out of here!”

Kelly: So, the ABCC— The Atomic Bomb Casualty Commission.

Moriguchi [Tr.]: The ABCC staff were coming to get only material or information of disease. They did not give any medical treatment, only to get research information.

Kelly: I see. They were just researching, collecting information, not helping.

I found that they happened to have similar cases in Hanford, so I visited one of the farms—

Kelly:  You visited the so-called Downwinders, people who were exposed?

Moriguchi [Tr.]: They are growing the vegetables agricultural products.

Moriguchi [Tr.]: When I talked to the man working at the farming house, he said that around Hanford there are some people who are suffering from disease, and some died.

Our society [Nagasaki Testimonial Society] has been working very hard for many years, to collect the testimony of the survivors. We published an English edition [English title: Voices of the A-Bomb Survivors: Nagasaki; Japanese title: Shogen: Nagasaki Hiroshima no koe]. This is a gift for you.

Moriguchi [Tr.]: This cover was drawn by a famous professor at Nagasaki University, a professor of art. This is an English version, but we publish, you know, Japanese books.

I hope you will read the book and all the survivors in the book telling how dreadful the bomb was.

When I returned from Hanford, I received many letters from American people. They said that it is Japan who started the war.

But I wonder if it is allowed to use any type or any kind of bomb just to stop the war. Even babies, children, dogs and cats, and old people all died. I think that we cannot allow, we are not allowed, to make more such weapons.

I hope that our message will be spread and I think that you, in your heart, you have something like a message to let the American people [know] about the atomic bomb.

Five years ago, I visited Dayton [Wright-Patterson] Air Force Base in Ohio. And we found the B-29 there, the Nagasaki bomber Bockscar, was displayed at the Air Force base.

When we visited Dayton, we brought photographs of atomic bombing

and we asked some staff to display this photo near the aircraft. But we were rejected.

After the war, we remember that American troops came to Japan. They gave us food. At that time, all over Japan, we had run short of food.

American people are very kind, you know. Kind enough to give food and clothing to Japanese people after the war. I wonder why such kind American people dropped a bomb on Nagasaki and killed children and many people. I cannot understand why.

Do you think that nuclear weapons are necessary to protect your own country? Please, a question.

Moriguchi [Tr.]: My brother and I returned home two days after the end of the war and eight days after the atomic bomb. When we returned home, I found that many people were not cremated, but burning, actually. Burning the dead bodies in many places. We had no crematory, just the burning. I remember a scene of hell, you know.

Kelly: Did your home survive?

Moriguchi [Tr.]: My house, our house, was a little bit far from the center, so only partly damaged. But our father’s factory was destroyed, mostly destroyed.

Kelly: What did the factory do?

Moriguchi [Tr.]: Kind of repair factory of engines or some machines of fishing boats.

Kelly: Fishing boat. So it wasn’t involved in war munitions or the Mitsubishi factory. It was not involved in military—

Moriguchi [Tr.]: There was no connection with the Army, but even fishing boats were used as a kind of Navy ship.

Kelly: I see, right. Everything was in the service of the war.

Moriguchi [Tr.]: At that time, we wondered why they don’t stop the war. They didn’t cease, finish, the war.

The writer survived the bomb, but, anyway, he died later. He wrote a poem about his experience. Matsuo Atsuyuki.

Kelly: Okay. He can translate.

Translator: He wrote, you know, a poem—

Translation: About his family.

Kelly: Right. There’s nothing left to do.

Translator: “Nothing more to do. Countless flies sitting up on my child, whom I lay upon the ground.”

Moriguchi [Tr.]: We have many testimonies in which they wrote about their family. The writer walked around this destroyed site searching for their wife and children. And some died. If you read or anyone can read this poem, they will understand how inhumane the atomic bomb was. He, the writer, lost his wife and three children. One child survived.

It’s a collection of poems from, the story was written by—

Moriguchi [Tr.]: Still, we have been collecting many such stories or testimony, even poems. I mean, our Society, Testimony Society.

Moriguchi [Tr.]: By publishing this book, we are trying to make people understand the effect of [this] inhumane weapon. I hope in your national park [Manhattan Project National Historical Park], you include a kind of explanation to introduce our message.

I was very surprised when I visited the atomic reactor [B Reactor] in Hanford. In the reactor, the American people, you know, are not conscious about radiation. We are kind of – I don’t know the word – but special [inaudible] to protect radiation. But they are not perfect fit. The American people are walking around. I brought a counter, a kind of radiation counter – I don’t know – [and it registered] 0.07 microsieverts.

I think just one millisievert is a dangerous level. Around the world, in many places like atomic reactors, or experimental reactors, or atomic-related facilities, they are affected by such doses of radiation. Contaminated by radiation.

I heard that in the nuclear test site after the war, many American soldiers were also affected by radiation, but the American government didn’t listen to their appeal or their voices, soldiers’ voices, I mean. In your park, I hope you will let visiting people understand, to know, how dangerous nuclear weapons are.

Kelly: Well, you will help that. You will help do that with your remarks. Your testimony will communicate to people.

Moriguchi [Tr.]: I understand you’re responsible to—what do you say—make such arrangements—or research—so I hope you will keep good research.

Kelly: Yes. Well, we want to work closely with people in Japan, like yourself and like the people at Nagasaki University and Hiroshima University and Tokyo, experts who have studied the effects of the atomic bomb.

Kelly: Yeah. Our goal is to share this information, which you’ve worked hard to collect and assemble, and make people aware of your story and the other stories that are there.

Moriguchi [Tr.]: Thank you for your work and your research.

Kelly: That’s right. Great. Well, thank you so much for this interview. This is really very valuable. I also admire all that you have done, too.

Moriguchi [Tr.]: This is also for you.

Kelly: Thank you. Thank you very much.

Kelly: This will be wonderful. Yes, these are great.

Moriguchi [Tr.]: We say to the people who visit this Society, we say that all the people, including you, are all survivors, atomic survivors.

Moriguchi [Tr.]: [Inaudible] and accidents, the mining of uranium, yes, radiation is created. I hope in your plan that such a danger must be told to many people, known to many people.

There are Nagasaki survivors, they are survivors in the wartime, but even after the war, there are many people affected by radiation all over the world. I thought that they don’t know, the American people don’t know, about the danger of radiation in Hanford.

I talked with many citizens, and they were so eager, serious, to listen to my story.

Moriguchi [Tr.]: Thank you for listening.

Kelly: Thank you. Thank you for your story.