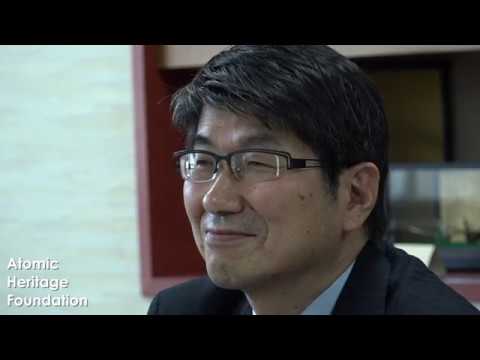 Cindy Kelly: Well, it’s my privilege to be here, and it’s such an honor to meet with you again after almost four years. And a lot has happened.

Kelly: Well, I am here to try to collect more of your stories, to try to begin a serious project to incorporate the Japanese perspective on the events of World War II, particularly what happened after the atomic bombs were dropped on Hiroshima and Nagasaki, and what that legacy means for the people in those cities but also the world today.

Taue [Tr]: Combining the legacy that is in the United States together with the legacy that is in our country, combining it together will fulfill the message that we need to convey for humankind. It is a totally different experience from what you can gain from reading books or seeing the movies or images and actually visiting sites. And I am truly grateful that you have come to the cities of Hiroshima and Nagasaki to learn about the reality and to read about the documents and artifacts that are in our cities and how our cities have revived, reconstructed our cities from the ruins.

Kelly: Yes. It is amazing. You have to go to the historical places to remember this was once flattened, because it’s obviously a vibrant and prosperous place now.

Kelly: I couldn’t agree with you more. Absolutely.

Taue [Tr]: When we met four years ago in New York, I thought that we share a common base.

Taue [Tr]: Hibakusha [Japanese atomic bomb survivors] are aging, and the population is decreasing. And there are becoming fewer and fewer people who can travel long distances, example, to the United States. This is an opportunity to listen directly to their first-hand experience. This opportunity is becoming rarer and rarer and it’s going to decrease year-by-year. I’m so grateful that you had the opportunity to listen to those hibakusha.

Kelly: Absolutely. It’s vital. We really feel it’s so important to at least capture their voices and their stories on camera and have that available to audiences around the world to listen to. Maybe you could start by telling us something about what happened to Nagasaki in August 1945, August 9, 1945. What was the impact of the atomic bomb?

The difference between the conventional bomb and the atomic bomb is the atomic bomb emits radiation. When the radiation penetrates through the human body, it destroys the cells. One of the acute, immediate symptoms [0:15:00] caused by the radiation is, for example, symptoms such as hair loss and bleeding from the gums and diarrhea and vomiting. The citizens did not know anything about nuclear weapons, so they did not understand what was happening to their bodies or to their cities. And many people who survived the atomic bombing – and they look healthy – but they suddenly had symptoms such as bleeding from their gums and died a few days later from the radiation sickness.

A few years later, they [survivors] become very weak and feel very tired all the time, and that made them difficult to adopt to the society because of their tiredness. One of the characteristics of the atomic bomb survivors is that they constantly live in anxiety because they do not know when the symptoms of radiation sickness will occur. So they have to live in fear every day. Every time I hear [a] hibakusha story, I just can’t believe why such a cruel weapon is present here. I think that people do not need such cruel weapons. The atomic bomb survivors’ first and foremost wish is that no one in this world will ever experience what they have gone through. That is the atomic bomb survivors’ common wish, and I believe that it is our mission to convey their wishes to the world.

Kelly: Well, you are certainly doing your part to convey their wishes with all of your energies through Mayors for Peace and working with the U.N. to get so many different countries and cities behind the effort to end nuclear weapons. Can you talk about that work? Can you tell us?

Taue [Tr]: As I mentioned before, the starting point of our activity is the experience of the hibakusha. In this world, there are many people who are wishing for peace. This is very common. I believe that the power to create peace not only relies on the political leaders, but also civil society has the power to create peace. I believe that the civil society has a role to move the government to move towards creating peace and to support such movement.

The political leaders have various difficult issues and sometimes they might think twice before stepping to such direction that we are hoping for. But I believe it is the civil society’s role to support them to take a step towards peace. I attend the international conferences held at the United Nations as a representative of the city of Nagasaki on behalf of the hibakusha and our citizens. The purpose of my attending such conferences is that – I would like you to take a look at the picture of the mushroom cloud. The conferences held at the United Nations, the perspective that they are discussing is from the perspective from this mushroom cloud.

Therefore, it is from the perspective of national interest or military balance. But for us, it is important to see from beneath the mushroom cloud. The purpose of my attending such conferences is to convey, to appeal to them, not to forget Hiroshima and Nagasaki – the experience of the two cities – and to have the discussion based on what has happened to our cities. Occasionally, I attend the conferences to make them have the discussion based on such perspective. The responsibility not to have the tragedy brought by the use of nuclear weapons, to prevent that. That is not only the responsibilities by the representative, political leaders, but I believe that the civil society also bears the responsibility. It is very important for the cities of Hiroshima and Nagasaki to convey the experiences of the atomic bombing.

The starting point of thinking what we can do to prevent the tragedy brought by the use of nuclear weapons – I think that the starting point of this is to learn the facts, what happened in August of 1945 in the cities of Hiroshima and Nagasaki. And therefore, I am truly grateful to have you visit the cities of Hiroshima and Nagasaki on this occasion.

I think that to visit those cities and to learn will start a new communication, such as the visit by the former U.S. President [Barack] Obama to Hiroshima. I believe that former President Obama felt with his heart, visiting the atomic-bombed city, although his visit was a short one. I hope that the leaders of the world – of each country – will visit the cities of Hiroshima and Nagasaki, and feel the city with his own feelings, and to convey his message and what he felt to the world will have a great impact. And other members of the civil society will follow and come to visit our cities. The most powerful impact conveying what happened in the cities of Hiroshima and Nagasaki in August 1945 was the story of the hibakusha, atomic bomb survivors. They had a great impact and they were the advocate of the story.

This is a photo of Mr. Sumiteru Taniguchi. He was mailing post on his bicycle when he was exposed to the atomic bomb. For more than a year, he had to lie facing the floor, because his back was severely burned. After he became an adult, he became the leader of the movement towards abolition of nuclear weapons. Several times, he had attended the conferences in the United Nations, and he also attended the conference in the year 2010. I was also attending the same conference.

Taue:  “I am not a guinea pig nor am I an exhibit. But those of you who saw this picture today, please, don’t turn your eyes away from me. Please look at me again. We are in the cursed curse of the atomic bomb all over our bodies. We, the hibakusha, continue to live in pain. Nuclear weapons are weapons of extinction and cannot coexist with humans.”

Taue [Tr]: This is part of his speech, message that he conveyed at this conference. The reason that the hibakusha continue to convey their experiences – one of the reasons is that they are aging, and they do not want anyone in the world, including Japan, to have to go through the same experience that they have gone through, even after the hibakusha do not exist in this world.

The hibakusha are aging, and the population of hibakusha is decreasing year-by-year. Very soon there will become an era whereby the humanity – there is no hibakusha in this world who had experienced the tragedy brought by the use of nuclear weapons. Even in an era where hibakusha do not exist anymore, our city has the mission to convey their stories so that nuclear weapons will never be used. When we talk about the use of nuclear weapons, people often consider that that is a history that was experienced in the two cities of Hiroshima and Nagasaki in the past. And that is just a past tense, past history.

Although we are trying to alert the current dangerous situation and for our future’s sake, but people tend to consider this as a past history. In order to have this issue as a universal issue, I think that it is important for other cities and people besides the cities of Hiroshima and Nagasaki to understand about this issue and to consider whether we really need nuclear weapons to exist in this world or not. And to join hands together towards our common goal and to have this become a universal issue that we all need to tackle.

There are various movements that are going against the direction we would like to head, and we are in a situation where it is not going as we wish it happens. But it is important for us and civil society never to give up, but continue with our efforts.