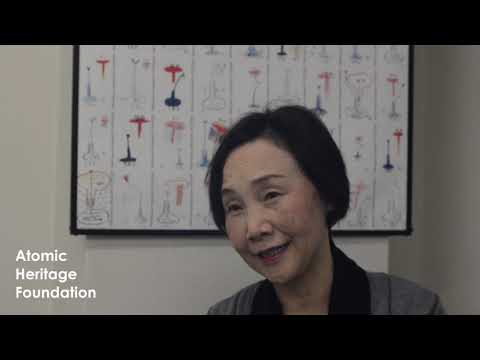 Tomoko Watanabe is the founder of ANT (Asian Network of Trust)-Hiroshima, an organization dedicated to international cooperation, peacebuilding, and peace education around the world. Her parents, who lived in Hiroshima, were atomic bomb survivors. Watanabe herself was born eight years after the bombings of Hiroshima and Nagasaki. In this interview, she discusses her organization’s work and her dream of creating a nuclear-free and conflict-free world.

Cindy Kelly:   I’m Cindy Kelly, Atomic Heritage Foundation, and it is February 15, 2019, in Hiroshima. I have with me a very special person. My first question is for her to tell us her name and spell it.

Kelly:  Tell us about your family and their special history.

Watanabe: My parents, my mother, and my father were A-bomb survivors. At the time, 1945, my father was 27 years old. At the time, he was in a train at Hiroshima station and he survived. My mother was a student nurse at Hiroshima Red Cross hospital, and she survived. Eight years after the bombing, I was born in Hiroshima. This is our history as A-bomb survivors. My mother was fifteen years old at the time. I was born eight years after in Hiroshima.

Recently, my mother told me, I was so surprised, she told me that when she was pregnant, when I was inside her belly, she was afraid of two things. One – whether she could survive after my birth, “maybe the baby will be delivered, but can I survive?” Two – she worried “whether my baby will be normal or not”. After the bombing, there were so many babies who were weak or had trouble. My mother worried about whether her baby, her first baby, would be normal or not. She couldn’t do anything, so she prayed to Buddha. Then, she gave birth to me, and I was a normal baby. So then, she told me that she felt that I, her baby, was her hope. I was very moved, sixty years later, she told me this year about this, this deep thing in her heart about how she worried about my growth and health. I understand now.

So when I was twenty, I had grown up in Hiroshima. At the time, there were many A-bomb slums and survivors, living together in Hiroshima. Very poor people, most of the people had lost their families and lost their houses. The slums were alongside the river, my friends had grown up there. My life, it was like living together with the A-bomb survivors was normal. When I was 20, a university student at the time, my beloved grandfather died in front of me. Like a stroke and he died right in front of me so I was very shocked, “Why, why has my grandfather now died?” He passed away in front of me and I started thinking, I’m still thinking today, “What’s the meaning of death? What’s the meaning of life?” and I suddenly noticed that I was born in Hiroshima, and that my parents were A-bomb survivors. My parents had experienced what had happened at the time.

A year after graduating, I married my husband, and at 24 years old I had my first baby, in total I have one son and two daughters and until I was thirty, I was focused on being the mother of my three children. Meanwhile my husband started his own law office and I worked as the manager of that office, it was a very busy time. But still, I kept in my mind, “What was the meaning of Hiroshima? What happened in Hiroshima?” I really wanted to know what happened in Hiroshima, what it means. So, when I was 33, I founded a small grassroots NGO, its name at the time was “Ajia no tomo to te wo tsunagu Hiroshima shimin no kai (The Hiroshima citizens’ group for joining with Asian friends), a long long name. This was a friendship association with Asian people, it was the first name. Then later I changed the name to ANT-Hiroshima. ANT meaning ant, we are little ants. It also stands for “Asian Network of Trust”. Trust building is very important, people to people. During the Second World War, the Japanese Imperial Army occupied China, Korea and so many people suffered, so I really want to build a real friendship between Asian people and Japanese people.

But now, ANT has grown up and I want to try and build friendship around the world. Asian people, American people, or other countries people, African people, especially if they have suffered from conflicts or disasters. We, especially I, want to enrich people-to-people ties. I started my grassroots NGO, but I don’t have any knowledge! You know, my English is very poor. I studied English, how to make a project, how to manage a project, how to fundraise. It’s all learning learning learning. The implementation is like having a left foot and another left foot, just constantly learning step by step by step. The NGO is small, but I think small is beautiful. Usually, many big organisations have much money and short-term projects. But our grassroots NGO is very small, has no money and no power, just a big heart, my friends tell me. One project at big foundations lasts a year, but a project at ANT can last fifteen years, we need it. For a long time, we go between people, Pakistani people, Filipino people, American people so we make a strong friendship, and trust-building. I’ve now been working thirty-one years but I really want to keep working until the end of my life. This is my mission.

Three, peace-building activities. I was born eight years after the atomic bombing, but now Hiroshima is a peaceful city. Everyone has enough clothes, enough food, enough education. But still now all over the world people suffer from conflict, disaster or poor, poverty, no water. This is a similar situation to 1945 after the bombing in Hiroshima. At the time, people around the world supported us, helped us, so I could grow up. Without this support and help, I think Hiroshima’s citizens couldn’t have lived. So, my mission as a second-generation A-bomb survivor, is to support these people. Now, with so many countries, Afghanistan Rwanda, the Philippines’ Mindanao Island, or Syria, like these, so I really want Hiroshima people to support and help these people.

Number four is peace culture and peace education, they are important for children, for young people. Many of the children think of violence, think that power is right. So many terrorists, especially suicide bombers. No. Peace, love, and compassion are very important. Cooperation is very important. I want to teach or talk to the children.

Number five is to grow the peacebuilders, the next generation. This is ANT-Hiroshima’s mission. Under the five missions, I’ve worked on very small projects in and out of Hiroshima. Continuing every day I think. Mainly, I have a children’s book project, its title is “Paper Crane Journey”. It is in two parts, one is about Sadako Sasaki, this is a very sad story. Sadako’s story is a very sad story of Hiroshima. Not just Sadako, so many children died from effects of the radiation. This is a very sad thing and this children’s book mentions about how Sadako’s friends started fundraising, junior high school students fundraised for three years and established the Children’s Peace Monument. “This is our cry, this is our prayer for building peace in the world.” Their strong wish, and this fact inspired children in other countries, children have little power, but we have power, we can change.

This is ANT’s philosophy, we are small, but gathering together, we can do something for a better future. So now, we have translated the book into thirty-one different languages, I provide them to the children. Sometimes I go to the countries, I talk to children or students or young people. For example, five years ago a big earthquake hit Nepal, so I went to Nepal, lots of children there had a deep trauma, so we supported them using this book. We are small, but we can do something. I believe that I continue to learn more and more, and my dream, I have so many young friends or senior friends all over the world and we trust them, so I continue to cooperate with these people to get a little change for society and finally, our dream can come true, a nuclear-free world. Our peoples’ peaceful world. We’re doing doing doing and working working working. This is my mission, this is my story.