Once the power that was hidden in uranium became evident, the emphasis shifted to methods to separate the much more potent U-235 from its abundant relative, U-238. This question consumed thousands of hours and millions of dollars.

Scientists had concluded that enriched samples of uranium-235 were necessary for further research and that the isotope might serve as an efficient fuel source for an explosive device. “Enrichment” meant increasing the proportion of U-235, relative to U-238, in a uranium sample. This required separating the two isotopes and discarding U-238. Uranium-235 occurred in a ratio of 1:139 in natural uranium ore. Since they were chemically identical, they could not be separated by chemical means. Furthermore, with their masses differing by less than 1 percent, separation by physical means would be extremely difficult and expensive.

Nevertheless, scientists pressed forward on several complicated techniques of physical separation, all based on the small difference in atomic weight between the uranium isotopes. Manhattan Project director General Leslie Groves wanted to investigate as many possibilities as possible, and had the resources to simultaneously pursue multiple speculative projects. 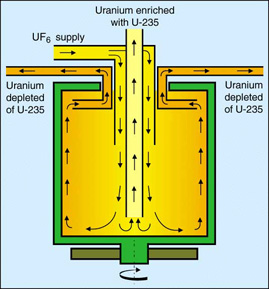 Centrifugal force in a cylinder spinning rapidly on its vertical axis would separate a gaseous mixture of two isotopes. This is because the lighter U-235 isotope would be less affected by the action and could be drawn off at the top center of the cylinder. A cascade system composed of thousands of centrifuges could produce a rich mixture. Beams pioneered this method and received much of the early funding.

A high-speed centrifuge initially seemed promising for uranium enrichment, but the Manhattan Project failed to produce a workable model, and research stopped during the war. The centrifuge Beams constructed could separate U-235 from U-238, but required huge amounts of energy and could only sustain a short run before breaking down; in other words, it was not suited for industrial production. Manhattan Project scientists opted to pursue gaseous diffusion over gas centrifuges as the primary method for uranium isotope separation, and in January 1944 Army support for the gas centrifuge method was dropped.

In the early 1950s, however, a German POW in the Soviet Union produced an efficient and durable centrifuge. Because the centrifuge does not require massive capital investment or special equipment, it is the preferred method of separation today, and poses the biggest threat for proliferation.

While centrifuges were thought a lost cause in American nuclear engineering, scientists abroad continued to work on them. Soviet physicists felt, correctly, that gaseous diffusion did not make sense, since it would use more power than it could produce. Fritz Lange, a German émigré working for the Soviet program, set to work on constructing a centrifuge. All his designs, however, used a horizontal centrifuge, which would invariably break due to the pull of gravity on the underside.

Max Steenbeck and Gernot Zippe, prisoners of war from Germany and Austria, were the next to tackle problem. Working in a POW camp, Steenbeck and Zippe made several improvements on Beam’s design. The centrifuge rotor was made to spin on the tip of a needle, like a top, thus eliminating friction, while the centrifuge was spun via an electromagnetic field. Though it took more research to adapt this to a scalable design, the basic design problems had been solved.

After release from the prisoner camp, Steeneck returned to East Germany, while Zippe traveled the world, marketing his centrifuge.

In the late 1950s, Zippe worked as a researcher at the University of Virginia, where he built a centrifuge largely from memory. Atomic Energy Commission officials marveled at the simplicity of his design. Subsequent US efforts to build a centrifuge progressed very smoothly. Because a functioning uranium-enrichment centrifuge can be built fairly quickly by a small team without prior experience, there are little technical barriers to proliferation.  This design would spread to become the main method for enriching uranium, and remains so today.

The electromagnetic method, pioneered by Alfred Nier of the University of Minnesota, used a mass spectrometer, or spectrograph, to send a stream of charged particles through a strong magnetic field. Atoms of the lighter isotope (U-235) would be deflected more by the magnetic field than those of the heavier isotope (U-238), resulting in two streams that could then be collected by different receivers.

The electromagnetic method as it existed in 1940, however, would have taken too long to separate quantities sufficient to be used in the current war. In fact, 27,000 years would have been required for a single spectrometer to separate 1 gram of uranium-235.

Ernest O. Lawrence of the Radiation Lab at the University of California at Berkeley favored this method and converted his giant cyclotron to accomplish this form of separation more efficiently. This model led to the eventual design and construction of the huge Y-12 Plant complex at Oak Ridge, Tennessee. Because of its exorbitant cost, electromagnetic separation was largely abandoned after the war for weapons production, but it played an important role in the development of the field of nuclear medicine.

Gaseous diffusion’s principle was simple: molecules of a lighter isotope would pass through a porous barrier more readily than those of a heavier isotope. The tiny weight difference between U-235 and U-238 meant that initial separation would be negligible. Repeat the process hundreds of times in sequential “cascades,” though, and the end product would be significantly enriched uranium.

Gaseous diffusion seemed promising in theory, but would clearly be difficult to implement on an industrial scale. Besides the massive scale involved, it was completely unclear in 1940 and 1941 how to construct a satisfactory apparatus for gaseous diffusion. Because of these problems, the S-1 committee did not make this method a priority.

Significant early work on gaseous diffusion happened in Britain, primarily at chemical conglomerate Imperial Chemical Industries (ICI) and the University of Birmingham. Both succeeded in producing a prototype of gaseous diffusion. Starting in 1941, a team at Columbia University in New York also researched gaseous diffusion, and produced a slightly different model.

Centrifuge research faltered in 1942, and General Leslie Groves pushed for more research into gaseous diffusion. In mid-1943, Roosevelt and Churchill signed the Quebec Agreement, under which British nuclear research was subsumed into the Manhattan Project; this meant full exchange of information. But serious problems remained. Besides the need for a porous barrier, component design would have to accommodate uranium hexafluoride, one of the most corrosive gases in the world.

Groves soon ordered the construction of K-25, but as construction crews cleared the site and poured the foundation it was still unclear what exactly was going to go inside the plant. To protect the pipes from corrosion, contractors undertook the new process of nickel coating. Sealing the pipes was also a problem, as grease would interfere with the process and uranium hexafluoride could not be permitted to leak out. The eventual solution was a completely novel seal material: Teflon.

Kellex Corporation undertook the barrier problem: developing a thin metal membrane with millions of tiny openings. After months of research and competition with an incomplete design from the team at Columbia, Groves accepted the Kellex design and ordered it installed in K-25. K-25, the largest roofed building in the world upon construction, would eventually serve as an intermediary step between S-50 and Y-12. Gaseous diffusion was important throughout the Cold War, but uses far more energy than centrifuges, and is now nearly obsolete.

The Uranium Committee briefly demonstrated an interest in a fourth enrichment process during 1940, only to conclude that it would not be worth pursuing. This process, liquid thermal diffusion, was being investigated by Philip Abelson at the Carnegie Institution in Washington. Abelson placed pressurized liquid uranium hexafluoride into the space between two concentric vertical pipes. With the outer wall cooled by a circulating water jacket and the inner wall heated by high-pressure steam, the lighter U-235 isotope tended to concentrate near the hot wall and the heavier U-238 near the cold. Over time, convection would carry the lighter isotope to the top of the column where it could be drawn off. Taller columns would produce more separation.

Like other enrichment methods, liquid thermal diffusion was at an early stage in 1940. Abelson eventually relocated his experimentation to the Naval Research Laboratory in Washington, DC, whereupon money was obtained to construct a pilot plant at the Philadelphia Navy Yard. When Oppenheimer learned the Navy was using liquid thermal diffusion for enriched uranium in submarines, the Manhattan Project subsequently built the S-50 Plant, which enriched uranium slightly before it was sent to K-25 and Y-12 for further enrichement. The inefficiency of this method meant that, like electromagnetic separation, it was obsolete after the war.