“Three can keep a secret, if two of them are dead.” Benjamin Franklin, the author of this slightly morbid quotation, probably had no idea how true this would come to be. Today, secrets permeate daily life. But during World War II, partly thanks to media censorship, the United States government kept the best-held secret: the building of the atomic bomb.

The Manhattan Project officially got underway in 1942. The primary locations—Los Alamos, NM, Oak Ridge, TN, and Hanford, WA—were all under strict security and secrecy measures to keep the project’s many secrets.

Colonel Franklin Matthias was in charge of the site at Hanford, WA. Hanford began operating in 1943 to build plutonium production facilities, forcing approximately 1,200 residents to relocate for the purpose of the war effort. Matthias was worried about the media leaking information and struck a deal with the newspapers to not write on the happenings in Hanford. “I told them, all the papers, any time there was news they could use, I would see that they had it. When this thing breaks open, I will see you get the word. I managed to keep that promise the day the first bomb was dropped.”

General Leslie Groves, Colonel Matthias, J. Robert Oppenheimer and the DuPont Company worked to keep the project under wraps. Byron Price, the director of the Office of Censorship, was responsible for keeping the overall project hush-hush from magazines, newspapers or radio broadcasts. On June 28, 1943 Price issued a directive to editors asking that there be no mention of “Production or utilization of atom smashing, atomic energy, atomic fission, atomic splitting, or any of their equivalents.”

Price oversaw the secrecy of the Manhattan Project until the bombing of Hiroshima on August 6, 1945. After that, coverage of the atomic bomb broke loose in media all over the United States and the world.

There had been prior press leaks about what was happening in the “Secret Cities” before the dropping of the atomic bomb. General Groves and other top officials of the Manhattan Project worked diligently to keep the project under wraps, but information still leaked out.

Groves’ priority with media coverage was to ensure that the press did not publicize what was happening on the Manhattan Project. He justified the secrecy as part of the plan to bring victory to the United States. Groves and other officials appealed to workers’ patriotism and desire for victory to keep their work concealed. In fact, a majority of the Manhattan Project workers were unaware of the final result of their work. 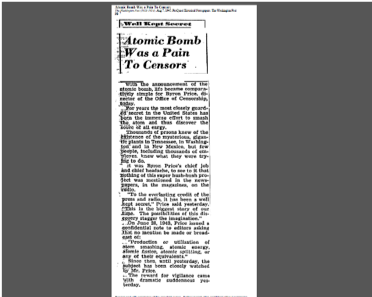 As Steven Aftergood explores in his article on Manhattan Project leaks, “Grounds for protecting information were largely patriotism, loyalty to the fighting men, and the reasoning that the less publicity given the Project, the more difficult it would be for the enemy to acquire information about it and also, the greater would be the element of surprise.”

The biggest and arguably the worst leak of the Manhattan Project was a report released in The Cleveland Press by John W. Raper, who happened to stumble upon Los Alamos a year and a half before the bombs were dropped on Japan. Raper described the city known as Los Alamos, with careful detail about the location, the presence of the military, and even J. Robert Oppenheimer. “It is the work of Prof. Oppenheimer and the hundreds of men and women in his laboratories and shops that makes Los Alamos such a carefully guarded city.” You can read the full report here. The report correctly identified the name and location of a secret city, mentioned Oppenheimer as the director, and alluded to the fact that explosives were being built there.

Approximately 1,500 secrets involving the Manhattan Project were leaked during its building phase. It wasn’t until 2014 when the full Manhattan District History (Volume 14 on Intelligence and Security) was posted online by the Department of Energy that these ”leaks” were released to the public. Most of these 1,500 “leaks” were inadvertent slips of information rather than sabotage. Regardless, every incident was investigated thoroughly. After September of 1943, investigations were conducted on more than 1,500 incidents of information leaks and loose talk. Disciplinary action was taken on more 1,200 violations of handling classified material.

One incidental leak that was investigated thoroughly focused on the University of Chicago’s student newspaper, The Chicago Maroon, and its editor, Abe Krash. Krash enrolled at the University of Chicago in 1944 and became editor of the Maroon in 1945. He was investigated for attempting to leak information about the Manhattan Project after the paper printed what he thought was an innocuous profile on Arthur Compton, who was the director of the Manhattan Project at Chicago. Krash was summoned by two military intelligence officers who told him that “The Maroon had committed a violation of the regulations of governing newspapers and publications.” Krash was told that the information printed on Arthur Compton could alert enemy agents in Chicago that military research was being conducted. Krash did not learn the full extent of this research until the bombing of Hiroshima. He recalled:

“Reflecting on it later, I thought this was, frankly, kind of preposterous, if you stop to think about it. That anybody would find anything out by reading that article…If you went into what was called the Reynolds Club, which was a big dining hall at the university. If you would go there for lunch, for example, or even for dinner, you would see there Enrico Fermi, Leo Szilard. Some of the most distinguished physicists in the world were there having lunch. Obviously, they were not there engaged in research on the Canterbury Tales!”

The United States was the first country to develop and use an atomic weapon. Secrecy was a crucial ingredient to the success of the weapon and the military took great care to keep the project secret. Nevertheless, Soviet spies, such as Klaus Fuchs and David Greenglass, infiltrated the project, relaying information back to Moscow. The work of the spies did not delay the American project, but contributed to the USSR’s development of their own atomic weapon in 1949.

Despite some leaks and other obstacles, the push for secrecy and the intense restrictions had their desired effect. When the first atomic bomb was dropped, the world erupted at the information that a bomb had been built under their noses. Individuals who had been working at Manhattan Project sites were shocked to discover what had been classified as “top-secret.” The building of the atomic bomb is still regarded as the United States’ best-kept secret.