During the Cold War, both the United States and the Soviet Union decided that their respective leaders needed an effective command system in order to maintain a reliable nuclear deterrent. Each side ultimately settled on a remarkably similar method: a briefcase that would allow its operator to order a nuclear attack within minutes.

The American nuclear “football,” officially known as the Presidential Emergency Satchel, first came into use in the aftermath of the Cuban Missile Crisis. “What would I say to the Joint War Room to launch an immediate nuclear strike?” asked President John F. Kennedy. “How would the person who received my instructions verify them?” Evidently, he did not receive a satisfactory answer.

American military officials solved this problem by creating a briefcase that would give the president the means to quickly receive information and authorize a nuclear strike. It was first photographed in the hands of a military aide on May 10, 1963, when President Kennedy was on a trip in Massachusetts. A nuclear war plan at the time was code-named “Dropkick”—a sequence that naturally would require a “football”—hence the briefcase’s nickname. 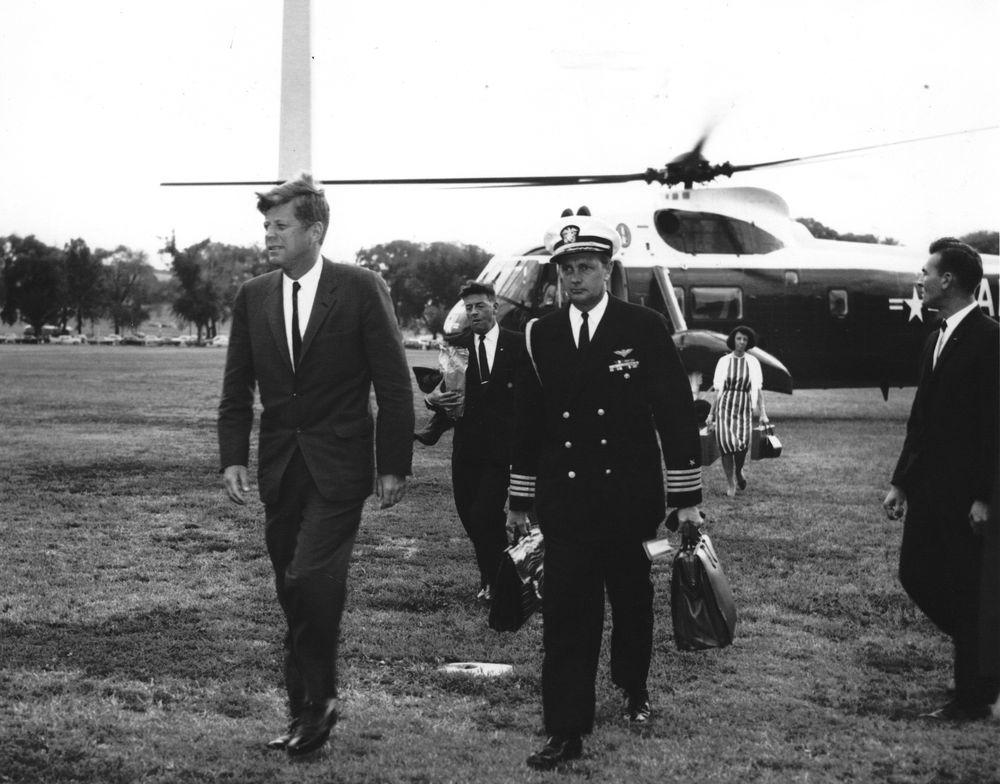 The football is only active when the president is away from the White House; the Situation Room—the secure intelligence center run by the National Security Council where the president can maintain command and control of the United States Armed Forces—is used otherwise. Once opened, the football can be used to verify the president’s identity, communicate with the National Military Command Center in the Pentagon, and provide a list of strike options.

Bill Gulley, the former director of the White House Military Office, revealed its contents in his 1980 book Breaking Cover: “There are four things in the Football. The Black Book containing the retaliatory options, a book listing classified site locations, a manila folder with eight or ten pages stapled together giving a description of procedures for the Emergency Broadcast System, and a three-by-five inch card with authentication codes [which the president usually carries separately from the football].”

President Jimmy Carter, however, found the retaliatory options inside the football overly complicated, so he ordered the creation of a simplified set of war plans. Colonel Robert “Buzz” Patterson, a military aide to President Bill Clinton, explained that the resulting list was similar to a “Denny’s breakfast menu. It’s like picking one out of Column A and two out of Column B.”

Contrary to popular belief, the football does not contain a nuclear button nor can the president launch a strike directly from the briefcase. Instead, the president can authorize a nuclear attack which is then carried out by the military. The president cannot authorize a strike, however, without the nuclear codes—or Gold Codes—written on a plastic card known as “the biscuit.”

Once the president orders an attack, the nuclear codes are confirmed by the Pentagon and are carried throughout the chain of command, including the bombers, submarines, and missile silos that make up the nuclear triad. A “two-man rule” during each step ensures that no single person is ever responsible for launching a nuclear attack. The first bombs will strike their targets within 30 minutes of the president’s command.

The Secretary of Defense is legally required to comply with the president’s orders, and a strike can only be stopped if multiple people in the chain of command disobey the order. As former Vice President Dick Cheney explained in 2008, “[The president] could launch a kind of devastating attack the world’s never seen. He doesn’t have to check with anybody. He doesn’t have to call the Congress. He doesn’t have to check with the courts. He has that authority because of the nature of the world we live in.” In the fall of 2017, the U.S. Senate Foreign Relations Committee held a hearing to consider the requirement of congressional approval for a preemptive nuclear attack. Senator Ed Markey also introduced a bill to Congress entitled “No Unconstitutional Strike Against North Korea,” but it remains unlikely to pass in the near future.

The Utah company Zero Halliburton manufactures the footballs, which are made from a modified aluminum briefcase and wrapped in black leather. Once filled with the necessary equipment and documents, each football weighs approximately 45 pounds. When the president is away from the White House, a military aide carrying the football is never more than a few steps away, even in elevators. Five military aides, who are also designated to brief the president in the event of a nuclear attack, rotate this responsibility. Colonel Patterson recalled the thrill of carrying the football: “You’re always kind of on edge. I opened it up constantly just to refresh myself, to always be aware of what was in it, all the potential decisions the president could possibly make.”

A second football is kept close to the vice president, while a backup resides at the White House. A retired, empty football is on display at the Smithsonian’s National Museum of American History.

Since the creation of the football, there have been a number of incidents which theoretically could have impeded the president’s ability to launch a nuclear strike.

In the summer of 1974—the final days of Richard Nixon’s presidency, when he was depressed and drinking heavily—the president reportedly announced at a meeting with congressional leaders, “I can go in my office and pick up a telephone, and in 25 minutes, millions of people will be dead.” A shocked Senator Alan Cranston warned Secretary of Defense James Schlesinger about “the need for keeping a berserk president from plunging us into a holocaust.” In response, Schlesinger allegedly gave top military officials an unprecedented standing order: should the president authorize a nuclear attack, they were to check with him or Secretary of State Henry Kissinger before continuing. Historians, however, continue to debate the accuracy of this episode.

There have also been a series of incidents involving “the biscuit” which contains the nuclear codes. President Jimmy Carter, who served in the White House from 1977 to 1981, once left his codes in the pocket of  a suit jacket that was sent to the dry cleaners. After the attempted assassination of President Ronald Reagan in 1981, his biscuit was tossed into a trash can at the George Washington University hospital when medical staff stripped off his clothes. The FBI recovered it soon after, and returned the codes to the White House. Perhaps most infamously of all, President Bill Clinton reportedly lost his biscuit for several months. “The codes were actually missing for months,” said General Hugh Shelton. “That’s a big deal—a gargantuan deal.”

In 1999, Clinton left a NATO meeting in such a hurry that the football was actually left behind. The military aide responsible carried the nuclear briefcase a half mile back to the White House without incident. During President Donald Trump’s visit to China in 2017, Chinese officials tried to stop the military aide carrying the football from entering the auditorium in Beijing’s Great Hall of the People, although the situation was quickly resolved.

The cheget is the Russian equivalent to the football, a black briefcase used to order a nuclear attack. Named after Mount Cheget in the Caucasus, the briefcase was created during the 1980s when the Soviet Union grew fearful of the increasingly shortened response time during which it would be possible to launch a retaliatory strike. 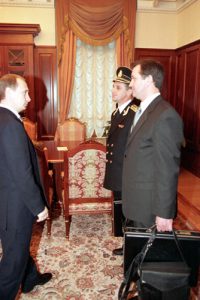 As far as we know, the operation of the cheget today is more or less the same as it was under the Soviets. There are actually three briefcases—one each for the president, the Defense Minister, and the Chief of the General Staff (a position similar to the American Chairman of the Joint Chiefs of Staff). The “triple key” system, which requires all three to input their respective launch codes, was designed to keep any one person from having ultimate authority given the intense competition between the Ministry of Defense and the General Staff in the Soviet Union.

In the present day, however, there is some ambiguity regarding the chain of command given that the prime minister—first in the line of presidential succession—does not have a cheget. Nuclear expert Alexei Arbatov has warned about a potential crisis if the president unexpectedly became incapacitated and has pushed Russian lawmakers to fix this system.

The cheget allows its operator to communicate with other Russian officials using a secure system code-named “Kavkaz” (the Russian word for the Caucasus). The briefcase is a part of Kazbek (also named after a mountain in the Caucasus), the command and control system which operates the Russian nuclear arsenal. The only known activation of the cheget occurred in 1995 during the Norwegian rocket incident. 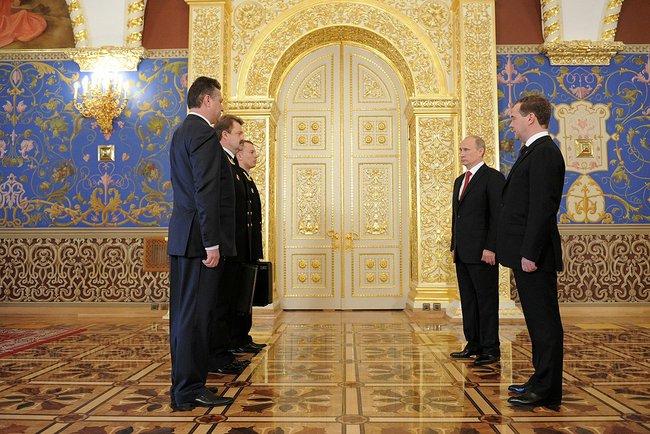 The cheget first appeared under General Secretary Konstantin Chernenko, who ruled for a little more than a year before his death in 1985 brought reformer Mikhail Gorbachev to power. During the attempted coup by Communist Party hardliners in August 1991, Gorbachev’s cheget disappeared while he was under house arrest in Crimea. It is suspected that KGB officials who supported the coup ordered the seizure of the briefcase. Gorbachev did not recover the cheget until four days later.

In the absence of a crown or scepter, the cheget has become a symbol of power for the Russian president. The day after the Norwegian rocket incident, for example, Yeltsin made a point of announcing to the press that he had activated the briefcase. His aides also made an announcement when Yeltsin took the cheget back from Prime Minister Viktor Chernomyrdin following his heart surgery in 1996. President Vladimir Putin has also treated the cheget as a symbol of power, ceremonially taking it from Yeltsin when he took office in December 1999 and telling journalists about his “training” for its use.

In 1985, the Soviet Union put into operation an emergency response system based on artificial intelligence. The system, officially called Perimeter but sometimes known as “Dead Hand,” can launch a retaliatory nuclear attack, otherwise known as a second strike. There is very little information on how Perimeter actually works, but it constantly monitors for incoming missiles and nuclear explosions. If it detects that an attack is underway, Perimeter will attempt to make contact with the nuclear suitcases and with designated nuclear bunkers. If it fails to reach any of these officials, only then will the system launch a nuclear attack.

Perimeter was eventually discovered by American officials and The New York Times referred to it as a “doomsday device” in a 1993 article. American RAND Corporation strategist Herman Kahn described the notion of a doomsday machine in his 1960 book On Thermonuclear War:

Assume that for, say, $10 billion we could build a device whose only function is to destroy all human life. The device is protected from enemy action (perhaps by being put thousands of feet underground) and then connected to a computer, which is in turn connected by a reliable communication system to hundreds of sensory devices all over the United States. The computer would then be programmed so that if, say, five nuclear bombs exploded over the United States, the device would be triggered and the Earth destroyed.

Kahn warned that such a device would be incredibly dangerous because it is “not sufficiently controllable.” Unlike Kahn’s fantasy, however, Perimeter does have at least some human oversight.

In 2012, Russian General Sergei Karakayev revealed that Perimeter is still operational today. “Yes, the ‘Perimeter’ system exists,” he said. “The system is on alert. If there’s a need for a retaliatory strike, the command for an attack may come from the system, not people.”

Related Video:
Members of past American administrations reflect on the nuclear football. Courtesy of the Discovery Channel
More Historical Resources: