The use of nuclear weapons at the end of World War II served as the starting point for an ongoing era of nuclear proliferation. Stockpiles rapidly grew as the United States and Soviet Union became embroiled in the Cold War, and rapid scientific advancement led to the creation of far more powerful weapons. Today, nuclear nonproliferation stands among the most pressing issues facing the international community.

Even prior to the United States’ use of atomic weapons, the Soviet Union’s atomic project was already underway. Using spies recruited at Manhattan Project sites – famous among which are Klaus Fuchs, George Koval, and Ted Hall, among others – the Soviets were able to accelerate their nuclear program by several years.

Following the war, the countries of the newly-founded United Nations needed to address the future of nuclear weapons. The United States proposed the Baruch Plan, calling for disarmament, a ban on production of nuclear weapons, the open exchange of scientific information required to use nuclear energy to achieve peaceful ends, and the use of nuclear power for peaceful purposes. The Soviet Union, citing issues of trust should they consent to such a plan under the western-dominated United Nations, rejected the idea.

As no firm agreement could be reached, the US and USSR plunged into a decades-long nuclear arms race. Partially as a result of successful espionage, the Soviets were quick to develop their first atom bomb. Access to uranium, which was much more common than previously thought, was initially achieved through mining in Eastern Bloc satellite states. Defying all expectations, the Soviet Union was able to detonate its first atomic bomb on August 29, 1949.

As neither country intended to cease nuclear development following the construction of the atom bomb, the United States and Soviet Union were in a race to create the world’s first hydrogen bomb – a weapon far more powerful than that dropped on Hiroshima or Nagasaki. Having had a head start, Edward Teller’s team, sanctioned by the newly formed United States Department of Defense, tested their first thermonuclear weapon on November 1, 1952. The following August, the Soviets followed suit with their own H-bomb, RDS-6 (referred to as Joe 4 by the US). 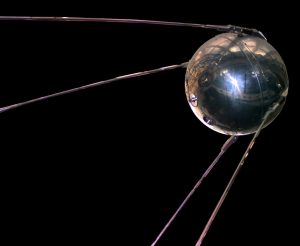 Despite the continuous technological developments surrounding nuclear armaments, the lack of a long-range delivery mechanism dampened the deterrent effect of said weapons. Originally, the only way to drop a nuclear bomb was through the use of strategic bombers. This changed with the production of intercontinental ballistic missiles (ICBM). To display advancement of ICBM technology, the US and USSR became intertwined in the Space Race. Although the official goal was to prove superiority in space exploration, the delivery mechanism for satellites was fundamentally the same as that for thermonuclear warheads. Thus, whichever state could successfully put a device in orbit would prove capable of reaching the other with a mounted warhead. The Soviet Union was the first to showcase the capability for long-range nuclear warfare when it launched the Sputnik satellite into orbit in 1957. The United States was slow to counter, taking two years to launch its first satellite.

At this time, both states had the capacity to obliterate each other’s major population centers. Although the United States and Soviet Union continued to improve and expand their arsenals, a stalemate of sorts had been reached. Mutually Assured Destruction (MAD) ensured, theoretically, that neither state would conduct a nuclear strike on the other, as nuclear retaliation would prove inevitable.

This concept, known as deterrence, did not guarantee peaceful interaction, as evidenced by the Cuban Missile Crisis. Even though both sides were armed with nuclear weapon-equipped ICBMs, the presence of Soviet missiles in Cuba almost led to the breakout of nuclear war.

During and after the Cold War, several countries developed nuclear weapons programs. 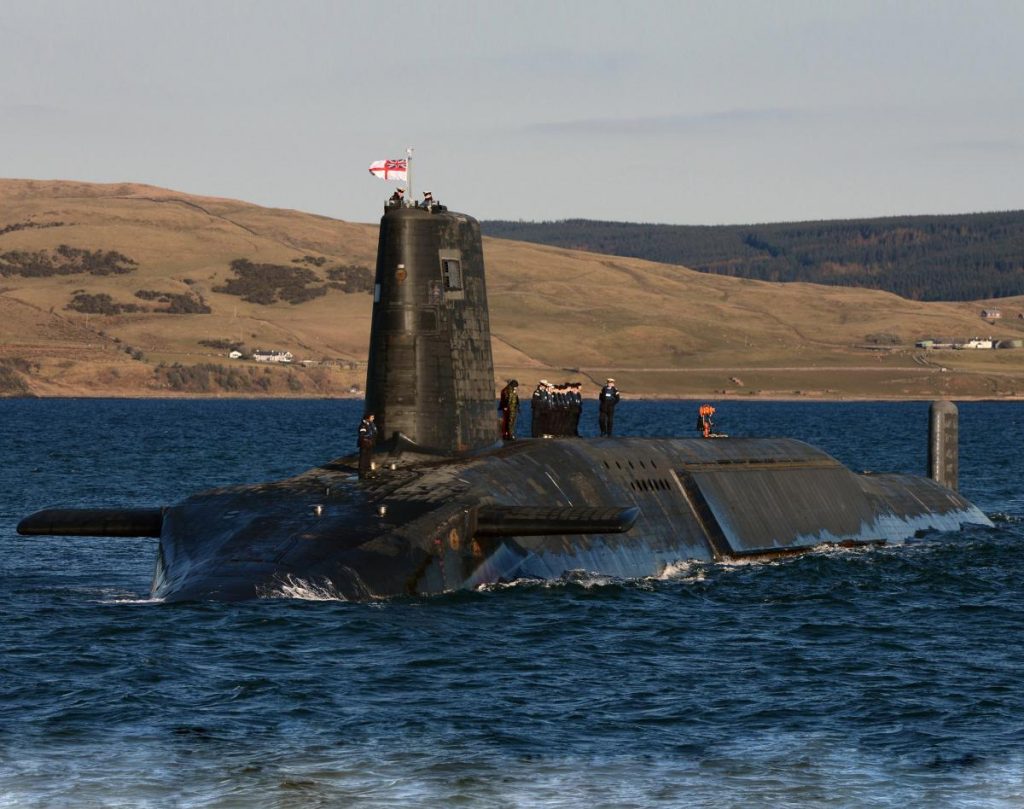 Israel: Israel maintains the position that it will not formally introduce nuclear weapons to the Middle East by testing a device. However, its nuclear reactor in the Negev desert named Dimona, constructed in early 1958, is believed to have gone critical shortly after the US discovered the facility in the early 1960s. By the end of the decade Israel most likely had assembled a bomb.

South Africa: South Africa pursued a nuclear weapons capability from the 1960s-1970s. In August 1977 the Soviet Union picked up intelligence that the country was preparing for a cold test of a nuclear device at Vastrap in the Kalahari Desert. The United States and its European allies successfully convinced the country to refrain from conducting the test. Subsequently, the country moved its nuclear program to an underground facility at Pelindaba. Later in September 1979, a United States Vela satellite detected a double flash, a common feature of a nuclear detonation, off of the country’s coast. While many officials and historians suspect that the incident was an actual test potentially involving Israel, evidence is inconclusive and the event remains controversial to this day. However, by the time Nelson Mandela became President in 1994, following the end of apartheid, South Africa had voluntarily dismantled its nuclear weapons.

United Kingdom: Initially, the British were barred access to United States nuclear design data. The threat of espionage necessitated heightened security surrounding the American nuclear program. Regardless, the United Kingdom was able to detonate its first atom bomb on October 3, 1952, thanks to the expertise of British Manhattan Project scientists. When nuclear cooperation with the United States resumed in 1958, the British deployed submarine-based American Polaris missiles equipped with nuclear warheads. Having such weapons stationed off the coast of the small island guaranteed a deterrent effect.

France: In the late 1940s, the French were successfully operating their own nuclear reactors. It was not until the late 1950s, however, that France decided to accelerate its nuclear program to achieve nuclear deterrence. On February 13, 1960, the French detonated their first atomic bomb in Algeria.

People’s Republic of China: In the 1950s, the Chinese gained the support of the Soviet Union in developing their nuclear program. Despite the ideological Sino-Soviet split in the latter part of that decade, the Chinese managed to detonate their first atomic device on October 16, 1964.

Israel: Although Israel’s nuclear program is shrouded in ambiguity, it is widely believed that Israel is in possession of nuclear weapons. Illegally obtained evidence provided by a former Israeli nuclear technician, Mordechai Vanunu, illustrates that the state has nuclear capabilities. Development of this program likely began shortly after World War II. At the time, the French were in collaboration with the Israelis and provided them with a research reactor in the 1950s.

India: India became the next country to detonate its first nuclear device. Work on a nuclear weapon commenced in the 1960s, but was not considered a priority. Following the Indo-Pakistani war of 1971, however, the Indian government accelerated work on this project. In 1972, authorization was granted for the production and testing of a nuclear device. The “Smiling Buddha” was detonated on May 18, 1974.

Pakistan: In response to the nuclear threat emanating from bordering India, Pakistan began work on its nuclear program in 1972. Twenty-six years later, Pakistan tested its first five nuclear weapons on May 28, 1998, as a reponse to India’s Pokhran II test earlier that month, making it the eighth nuclear state.

Other countries: Throughout the Cold War, several states had possession of nuclear weapons, but destroyed or surrendered their stockpiles. Belarus, Kazakhstan, and Ukraine agreed to get rid of their nuclear weapons following the collapse of the Soviet Union. The South African apartheid-era government eliminated their stockpile, worried that the weapons could fall into the hands of militants. 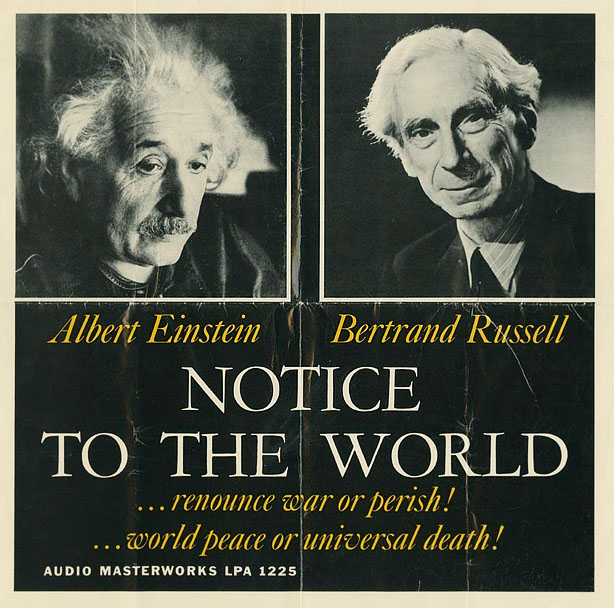 Many view the proliferation of nuclear weapons as a danger to the international community. North Korea and Iran are the current epicenters of concern regarding the issue of horizontal proliferation. There are similarly fears that non-state actors – especially terrorist groups – may acquire these weapons. India and Pakistan have been on the cusp of nuclear war, showing that the logic of mutually assured destruction may not be as sound as previously thought. Thus, a number of steps toward nonproliferation have been taken.

The Pugwash Conference, organized by Joseph Rotblat, was the first major, non-governmental effort to curb the proliferation of nuclear weapons. This conference was the result of the Russell-Einstein Manifesto, and initially involved twenty-two scientists from countries on both sides of the Cold War divide. Over the years, Pugwash convened with the goal of reducing production and stockpiles of nuclear weapons. Rotblat, along with the Pugwash Conferences, was awarded the 1995 Nobel Peace Prize for these efforts.

The most crucial treaty dealing with the issue of nuclear weapons proliferation, the Nuclear Non-Proliferation Treaty (NPT), came into force on March 5, 1970. Noting that the trend of horizontal proliferation would inevitably continue, the United States and Soviet Union collaborated to prevent such an outcome. This treaty identified the United States, Soviet Union, United Kingdom, France, and China as nuclear weapons states.

For more information about the treaty, visit our page on the NPT.