Army's Area Engineer; Director of the Combined Operations for the Production of Fissionable MaterialChicago, IL 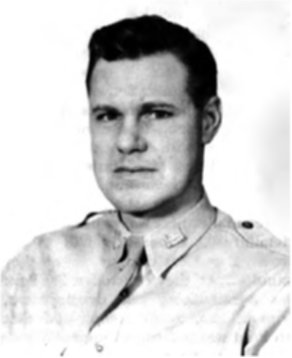 Colonel Arthur “Pete” V. Peterson was the Army’s area engineer at the University of Chicago’s Metallurgical Laboratory (“Met Lab”) during the Manhattan Project.

In 1942, Peterson served as the Army and Manhattan Engineer District’s (MED) representative at the Met Lab. He oversaw the development and production at the site. He was also responsible for reporting the Met Lab’s progress back to the Army and MED.

While at the Met Lab, Peterson became close friends with Arthur Compton and Enrico Fermi. According to Peterson’s son, he and his wife often had Compton and Fermi over for dinner.

Before D-Day, Peterson briefed General Dwight D. Eisenhower about the possibility that the Germans had radioactive material.

On October 31, 1912, Arthur Vincent Peterson was born in Morristown, New Jersey. He graduated from New York University (NYU) with a degree in civil engineering in 1936. At NYU, he was also a heavyweight college boxer.

In 1937, he earned his master’s degree in civil engineering from Cornell University. While at Cornell, he also met his wife, Marie-Louise.

Peterson began his active duty for the U.S. Army in June 1941.  The following year he began training in nuclear engineering at Fort Bragg in North Carolina.

Peterson opened his own consulting firm, AVP Associates, in 1958. As a consultant, he continued to focus on nuclear power planning and development. He worked well into his seventies.

In 1994, he moved with his wife to Seattle, WA to be closer to their sons and grandchildren.

At the age of ninety-five, Arthur Vincent Peterson died in Seattle on March 24, 2008.

Arthur “Pete” V. Peterson's Timeline
1912 Oct 31st Born in Morristown, New Jersey.
1934 Graduated from New York University with a civil engineering degree.
1937 Earned his master's degree in civil engineering from Cornell University.
1941 Began active duty in the Army.
1942 Transferred to Fort Bragg in N.C.
1942 Transferred to the Met Lab.
1946 Appointed Chief of the Fissionable Materials Branch of the Atomic Energy Commission (AEC).
1958 Opened his own consulting firm, AVP Associates.
1994 Moved with his wife to Seattle, WA.
2008 Mar 24th At the age of ninety-five, died in Seattle.

K. L. Rathburn worked for the Tennessee Eastman Corporation at the Y-12 Plant.

Luin W. Hough was a photographer at the University of Chicago’s Metallurgical Laboratory (“Met Lab”) during the Manhattan Project.

Donald D. Beaudette served as a technical sergeant in the 393rd Bombardment Squadron. He was a member of the ground crew regularly assigned to the B-29 Straight Flush.