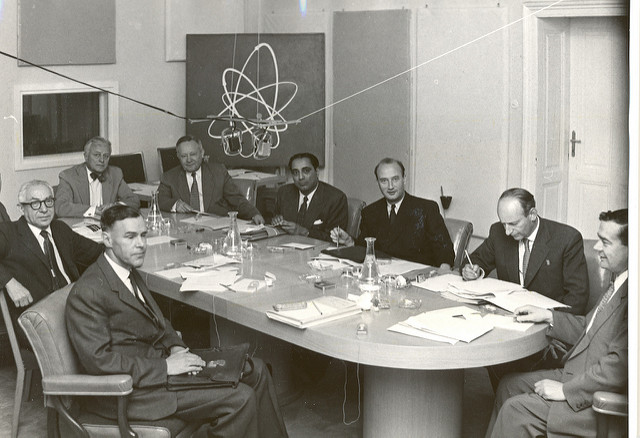 Bertrand Goldschmidt was born on November 2, 1912 in France. He studied chemistry at the Radium Institute and earned his Ph.D. from the Institute in 1939.

After earning his Ph.D., Goldschmidt became a professor at the Radium Institute. His tenure, however, only lasted until 1940, the year the Vichy government began to forbid Jews from holding academic positions.

Shortly following his dismissal, he joined the Free French Forces.

Following World War II, Goldschmidt began working at the French Atomic Energy Commission (CEA). From 1946 to 1959, he served as the head of the chemistry division. He eventually became the head of external relations and planning at the CEA.

During his time at the CEA, Goldschmidt helped foster early French-Israeli nuclear ties and commercial exchanges of both nuclear technology and policy development. In 1954, he traveled to Israel to meet with Prime Minister David Ben Gurion regarding nuclear issues.

From 1956 to 1957, Goldschmidt and a few other senior CEA officials participated in French-Israeli nuclear negotiations. The establishment of the Dimona nuclear facility in Israel was the result of these negotiations.

Goldschmidt served as the French Governor on the Board of the International Atomic Energy Agency (IAEA) for twenty-two years and the Chairman of the IAEA for one year.

In 1967, Goldschmidt was awarded the “Atoms for Peace” award by Atoms for Peace, Inc. During his lifetime, he wrote several books. Two of the most notable were The Atomic Complex (1982) and Pioneers of the Atom (1987).

At the age of eight-nine, Bertrand Goldschmidt died on June 11, 2002 in Paris, France.

Bertrand Goldschmidt's Timeline
1912 Nov 2nd Born in France.
1939 Earned his Ph.D. from the Radium Institute.
19391940 Served as a professor at the Radium Institute.
1942 Joined the Met Lab.
1942 Joined the Montreal Laboratory.
19461959 Served as the head of the chemistry division at the French Atomic Energy Commission (CEA).
1954 Met with Israeli Prime Minister David Ben Gurion.
19561957 Participated in French-Israeli nuclear negotiations with other senior CEA officials.
19581980 Served as the French Governor on the Board of the International Atomic Energy Agency (IAEA).
1967 Awarded the "Atoms for Peace" award.
1980 Became the Chairman of the IAEA.
1982 Published: The Atomic Complex.
1987 Published: Pioneers of the Atom.
2002 Jun 11th At the age of eighty-nine, died in Paris, France.

Richard Ungemach served in the army at Los Alamos during the Manhattan Project.

George Kehl was a metallurgist and professor at Columbia University’s School of Mines. He worked at Los Alamos on the Manhattan Project.