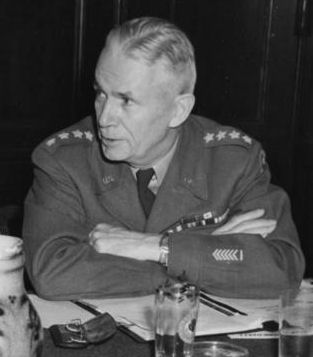 Brehon Burke “Bill” Somervell (1892-1955) was a Lieutenant General in the US Army who commanded the Army Service Forces and supervised much of the Army’s involvement in the Manhattan Project.

Somervell was born in Little Rock, Arkansas and raised in Washington, DC. He graduated from the US Military Academy in 1914, right around his 21st birthday. He served in Mexico and in World War I in France with the Army Corps of Engineers, earning the Distinguished Service Medal and Distinguished Service Cross (the Army’s second-highest honor). Upon the end of the war, he served with the occupying forces in Germany, and got married while still abroad. He continued to work in Germany for the League of Nations.

After his return to the US, he went back to work as an army engineer. He was selected for post-secondary education at the General Staff College and Army War College. After that, he became head of the Works Progress Administration, a New Deal agency, for New York City. One of his major projects was the construction of New York Municipal Airport (now LaGuardia Airport).

Upon his return to military service, he became head of the Construction Division of the Office of the Quartermaster. He drastically reorganized and streamlined the division, and gained a reputation for shrewd handling of public relations. It was also there that he became acquainted with future General Leslie Groves. He would eventually select Groves to head up a project that had been his brainchild: the construction of a new headquarters for the War Department, soon to be called the Pentagon.

Somervell was eventually promoted—alongside his deputy, General Wilhelm Styer—to lead the Services of Supply (SOS), which would eventually be renamed the Army Service Forces (ASF). He was kept in the dark in the initial stages of the Army’s involvement with the Manhattan Project, but was briefed some time in 1942. He helped with the formation of the Military Policy Committee and the appointment of Groves to head the project. He was, in fact, the first person to inform Groves of his new role.

Vannevar Bush feared that Somervell was trying to wrest control of the project away from Bush’s group of scientists. Those fears were strengthened by the appointment of Groves without Bush’s knowledge. In addition to this early planning help, Somervell continued to contribute to the project by securing funding (always disguised to maintain secrecy) and manpower.

According to Groves’s recollections, Somervell was concerned about the (domestic) consequences of the project’s failure. He apparently told Groves, “I am thinking of buying a house about a block from the Capitol….It will be convenient because you and I are going to live out our lives before Congressional committees.”

Somervell had broader duties than the Manhattan Project, however. He was in charge of making sure the entire US military, and the militaries of other Allied nations, were supplied throughout the war. This included the massive movement of materiel in preparation for the D-Day landings. He fought often with decision-makers in Washington. That tendency, combined with his carefully groomed appearance, earned him the description “Dynamite in a Tiffany Box.” He also found time to get remarried during the war, after his first wife had passed away.

He retired from the military in 1946. He ran Koppers, a Pittsburgh-based manufacturing company, until his death. He died in 1955 in Florida, while on leave after a pair of surgeries. The Army has named a medal and a ship in his honor. He was also once featured on the cover of TIME magazine.

Generals Somervell and Hoag at the Potsdam Conference