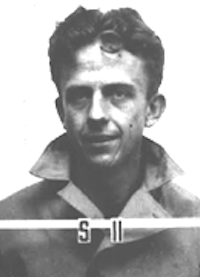 David Hawkins (1913-2002) was an administrative aide at Los Alamos and the Manhattan Project’s official historian.

Born in El Paso, Texas on February 28, 1913, Hawkins grew up in La Luz, New Mexico, near Alamogordo. He received bachelor’s and master’s degrees in philosophy from Stanford University. While studying for his Ph.D. in philosophy at Stanford University, he became friends with J. Robert Oppenheimer. While at Berkeley, Hawkins joined the Communist Party, although he left the party in 1940.

In 1943, Oppenheimer recruited Hawkins to join the Manhattan Project at Los Alamos. He was soon joined by his wife Frances, who founded the nursery school at Los Alamos, and their young daughter Julie. The Hawkinses lived in the same four-family house as Ellen and Victor Weisskopf, with whom they became close friends.

Hawkins served as an administrative aide to Oppenheimer and a liaison officer to the War Department, playing an important role in Oppenheimer’s success as head of the laboratory. He also served as the project’s historian, writing a history of “Project Y” that he completed in 1946.

Hawkins, familiar with New Mexico from his childhood there, is sometimes credited with suggesting the Trinity Site as the location for the first test of an atomic device. However, he declined to attend the Trinity test and later commented that he was “disturbed” by his colleagues’ enthusiasm over its success.

After the Manhattan Project, Hawkins became a professor at the University of Colorado-Boulder. In 1950, he and Frances were called to testify before the House Un-American Activities Committee. Despite efforts to fire him over his past Communist Party membership, Hawkins was able to retain his job at UC-Boulder.

Known for their leadership on early education, he and Frances co-founded the Mountain View Center for Environmental Education in 1970. In 1981, he received a MacArthur Foundation “genius” grant. He died on February 24, 2002 at the age of 88.

David Hawkins's Timeline
1913 Feb 28th Born in El Paso, TX.
1934 Received a B.A. in Philosophy from Stanford University.
1936 Received an M.A. in Philosophy from Stanford University.
1938 Joined the Communist Party.
1940 Received a Ph.D. in philosophy from the University of California, Berkeley.
1943 Joined the Manhattan Project at Los Alamos as an administrative aide to J. Robert Oppenheimer and liaison officer to the War Department.
19451946 Served as historian of the Manhattan Project.
1947 Became a professor of philosophy at the University of Colorado-Boulder.
1950 Testified before the House Un-American Activities Committee.
1970 Co-founded the Mountain View Center for Environmental Education.
1981 Received a MacArthur Foundation "genius" grant.
2002 Feb 24th Died in Boulder, CO.

W. K. Martin worked for the Tennessee Eastman Corporation at the Y-12 Plant.

O’Connor worked in the 300 Area at Hanford during the Manhattan Project.