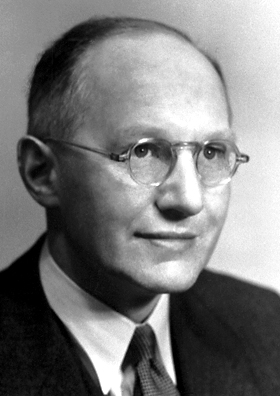 Walton was born at Dungarvan, County Waterford, Ireland, on October 6, 1903. In 1922, he matriculated to Trinity College, Dublin, where he studied mathematics and experimental science, specializing in physics. He received his B.S. in 1926 and his M.Sc. in 1927. That same year, he moved to Cambridge University, where he worked at Cavendish Laboratory under Sir Ernest Rutherford.

At Cavendish, Walton received his Ph.D. (in 1931) and went to work on methods for producing fast particles and on linear particle accelerators. Working with John Cockcroft, Walton built an apparatus to show that light elements disintegrated when bombarded with fast protons. Using enormously high voltages — 700,000 volts — Walton bombarded a piece of lithium with fast particles, splitting the lithium into helium atoms or “alpha particles,” which he later described as looking like “twinkling stars.” This was the first ever experiment to split the atom.

In 1934, Walton returned to Trinity College, where he took up a post as a lecturer in the physics department. In 1938, Walton and Cockcroft received the Hughes Medal of the Royal Society, and in 1951 they shared the Nobel Prize in physics for “work on the transmutation of the atomic nuclei by artificially accelerated atomic particles.” Walton died June 25, 1995, in Belfast, age 91.

Raymond C. Grills is an American physical chemist who worked at the University of Chicago’s Metallurgical Laboratory and at Hanford during the Manhattan Project.

Myfanwy Pritchard Roberts worked in Rhydymwyn, Wales as a laboratory assistant in the Tube Alloys program, the British mission to create the nuclear bomb.