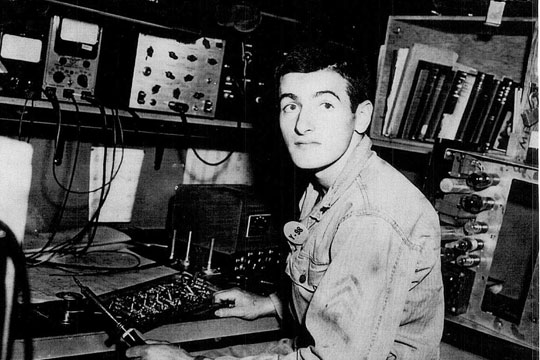 After only completing one semester at MIT, the army recruited Hans Courant. Due to a serious case of spinal meningitis, Courant was taken out of a combat unit and placed into the Special Engineer Detachment (SED) stationed at Los Alamos. He was assigned to an electronics lab and built circuits for physicist Matthew Sands, who would become his advisor and colleague for many years after the Manhattan Project ended. Because his father was a big name in the scientific community, Courant was often invited to dinners and parties with the major scientists, despite his military status. He was also one of the few people who witnessed the Trinity test.

Hans Courant was born in Gottingen, Germany in 1924. To avoid Nazi persecution, Courant’s father asked mathematician Harold Bohr, brother of Niels Bohr, to host Courant in Copenhagen for an extended period of time. Courant stayed in Copenhagen from 1932 to 1934, when Courant’s father got a job teaching at NYU and the Courant family emigrated to the United States. The Courant children attended the Fieldston school, where J. Robert Oppenheimer had gone, and Hans went to MIT after graduating early.

After the war, Courant returned to MIT to complete college and worked in the lab of his former Los Alamos boss, Matthew Sands. Courant completed his doctoral thesis on cosmic rays and cloud chambers and then continued to study them, both in the United States and in Europe, after he received a fellowship to study at the Ecole Polytechnique in Paris. Eventually, he returned to the U.S. and after studying at Yale and working in the Brookhaven lab, he was once again called to Europe and spent two years working for the Centre Europeene pour la Recherche Nucleaire (CERN). Finally, Courant took a professorship at the University of Minnesota where he has worked ever since.

Hans Courant's Timeline
1924 Oct 30th Born in Gottingen, Germany.
19321934 Stayed with Harold Bohr in Copenhangen.
1934 Moved to New Rochelle with his entire family after his father got a job at NYU.
1942 Recruited by the army.
1943 Sent to Los Alamos to work under Matt Sands.

Williamson worked at the 300 Area at Hanford during the Manhattan Project.