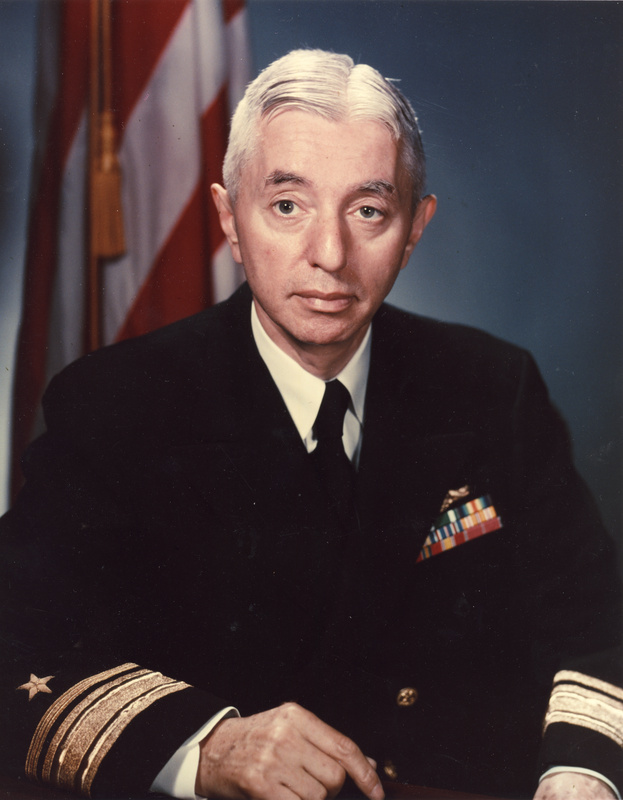 Hyman George Rickover was a Navy admiral who served during World War II who is known as the “Father of the Nuclear Navy” due to his role in developing the first nuclear-powered submarine.

Born Chaim Godalia Rickover in Poland, then part of the Russian Empire, Rickover traveled to the United States with his family at a young age as part of a wave of Jewish refugees fleeing Russian pogroms during the Revolution of 1905. After initially settling in New York City, the family moved to Chicago, where Rickover’s father worked as a tailor. Rickover got his first paid job at age 9, and during high school he worked full time delivering Western Union telegrams.

Rickover sought an appointment to the United States Naval Academy after high school, as his parents could not afford college tuition. Rickover graduated in 1922 in the top quarter of his class, and then joined the crew of a warship. In under a year, he was made an engineer officer, the youngest in the squadron. He served next onboard a battleship before returning to school. After a year at the Naval Postgraduate School and time at Columbia University, Rickover received his M.S. in Electrical Engineering.

The Father of the Nuclear Navy

In 1946, Rickover traveled to Oak Ridge as part of a project to develop a nuclear electric generating plant. There Rickover became convinced that nuclear-powered ships, and particularly nuclear-powered submarines, were the future of the Navy. This belief was not shared by Rickover’s supervisors, and he was reassigned to Washington, D.C. There he brought his idea up directly with Chester Nimitz, then the Chief of Naval Operations. With his support and that of the Secretary of the Navy, the Nuclear Power Division was established in the Bureau of Ships under Rickover’s direction. Rickover and Alvin M. Weinberg, the director of research at Oak Ridge, began work on the new pressurized water reactor for the submarine.

In 1949, Rickover became Director of the Nuclear Power Division, Bureau of Ships, and was appointed chief of the Naval Reactor Branch, Reactor Development Division, in the Atomic Energy Commission. These two roles allowed Rickover a large degree of control over the development of the nuclear-powered submarine, and also in overseeing the development of the first full-scale, commercial nuclear power plant dedicated to peacetime operation. In these roles, Rickover was often forced to send letters to himself to request certain things.

Congress authorized the construction of the nuclear-powered submarine, called the Nautilus, in 1951. The ship was propelled by the Submarine Thermal Reactor a pressurized water reactor built by the Westinghouse Corporation. The submarine was christened in 1954 by Mamie Eisenhower, and traveled out to sea for the first time in 1955. The submarine would go on to break many records, as its nuclear reactor allowed it to travel longer distances and to stay underwater longer than other submarines.

Rickover continued to head the Navy’s efforts into building a nuclear-powered arsenal. He interviewed every prospective officer considered for a post on a nuclear ship, tens of thousands of interviews. These highlighted his unorthodox style and stringent standards. While Rickover was not generally well liked by other Navy officials, he is largely responsible for the lack of any reactor accidents in the United States Navy. He was passed over twice for promotion to admiral, but strong support in the government led to his continued service and his eventual admiral appointment.

Admiral Rickover was finally forced to retire in 1982, after sixty-three years of service. In total, Rickover served longer than any other naval officer in history, and became the first person to receive two Congressional Gold Medals. The USS Hyman G. Rickover submarine was commissioned in 1984, one of the few ships to be named after a living person. Rickover died in Arlington, Virginia, on July 8, 1986, at the age of 86. He is buried in Arlington National Cemetery.

For more information on Admiral Rickover, see his obituary in The New York Times.

H. M. Bryans worked for the Tennessee Eastman Corporation at the Y-12 Plant.