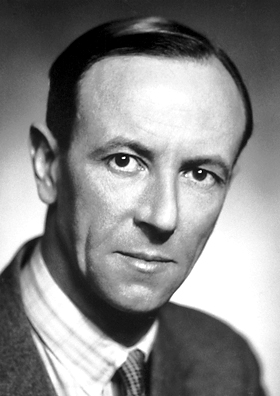 James Chadwick began his academic studies at the University of Manchester under the tutelage of Ernest Rutherford. Here, he earned his B.S. in 1911 and his MSc in 1913. Chadwick then decided to take up research under Hans Geiger in Berlin. His intention was to study beta radiation, but shortly into this endeavor, World War I broke out and the German government imprisoned Chadwick in the Ruhleben internment camp for four years.

Aided by sympathetic German soldiers, Chadwick was able construct experiments even while imprisoned during the war. When the war came to a close, Chadwick returned to England and continued research under his previous advisor Ernest Rutherford at the Cavendish Laboratory at Cambridge University. There, he received his doctorate in 1921 and remained with the laboratory until he moved to the University of Liverpool in 1935.

Chadwick is best known for his discovery of the neutron in 1932. A neutron is a particle with no electric charge that, along with positively charged protons, makes up an atom’s nucleus. Bombarding elements with neutrons can succeed in penetrating and splitting nuclei, generating an enormous amount of energy. In this way, Chadwick’s findings were pivotal to the discovery of nuclear fission, and ultimately the development of the atomic bomb. For more on Chadwick’s scientific contributions, please visit the Nobel Prize website.

Chadwick was a member of the British MAUD Committee, which concluded that the creation of nuclear weapons was possible and even inevitable. This supposition contributed towards President Roosevelt’s decision to build the atomic bomb. Additionally, Chadwick was an integral figure in the Tube Alloy Project—the codename for the British program to devise and develop nuclear weapons. His overtures to government officials in the UK and US were central to UK-US cooperation.

From 1943 to 1946, Chadwick headed the British Mission to the Manhattan Project. He also served as the technical advisor to the US-Canadian-UK Combined Policy Committee, which coordinated control of the project between the three nations involved. In 1944, Chadwick moved his family to the Project’s main research facility in Los Alamos. Finding the housing conditions distasteful, his twin daughters objected to the move, and so the family relocated to Washington D.C. where he continued to contribute to the Project’s efforts.

Chadwick formed a particularly congenial relationship with General Leslie Groves during the war. The two’s friendship aided British efforts to maintain strong support with the United States throughout the Manhattan Project. Chadwick was the only civilian—and non-American—allowed to access the entirety of the Manhattan Project’s research, data, and production plants.

Throughout the war, Chadwick drafted agreements to supply uranium for the Manhattan Project. Additionally, he observed the first atomic explosion, known as the Trinity test. Because of Chadwick’s insistence, British observers were allowed to be present at the bombing of Nagasaki.

Shortly after the war ended, Chadwick became an outspoken advocate for the United Kingdom to acquire a nuclear stockpile of its own. He was appointed to the British Advisory Committee on Atomic Energy (ACEA) and served as the UK delegate to the United Nations Atomic Energy Commission. Patrick Blackett, another Nobel laureate and eminent British scientist, vehemently opposed Chadwick’s argument for British atomic capability. Ultimately, though, Chadwick won out and the United Kingdom pursued its own nuclear arsenal.

Chadwick became the Master of Gonville and Caius College at Cambridge University in 1948. He resided in this administrative position for the remainder of his career. He took up retirement in North Wales beginning in 1958. He eventually moved back to Cambridge, where he passed away in 1974.

In addition to receiving the Nobel Prize in Physics, James Chadwick was knighted in 1945. He was awarded the US Medal of Merit in 1946 and the Copley Prize by the British Royal Society in 1950.

James Chadwick's Timeline
1891 Oct 20th Born in Cheshire, England.
1908 Entered Manchester University.
1911 Graduated from the Honours School of Physics.
19111913 Studied under Ernest Rutherford in the Physical Laboratory in Manchester, working on radioactivity problems.
1913 Earned his M.S.
1913 Awarded the 1851 Exhibition Scholarship and went to Berlin to work in the Physikalisch Technische Reichsanstalt at Charlottenburg under Professor H. Geiger.
19141918 Interned in Ruhleben, Germany during World War I. Was allowed to set up a lab.
1918 Returned to England to accept the Wollaston Studentship at Gonville and Caius College, Cambridge. Resumed study under Rutherford.
1921 Awarded his Ph.D. from Cambridge.
19211935 Elected Fellow of Gonville and Caius College.
1923 Appointed Assistant Director of Research in the Cavendish Laboratory.
1927 Elected Fellow of the Royal Society.
1935 Left Cambridge to take appointment as Lyon Jones Chair of Physics in the University of Liverpool.
1932 Proved the existence of neutrons.
1932 Awarded the Hughes Medal of the Royal Society.
1935 Won the Nobel Prize in Physics for his discovery of the neutron.
1940 Visited the United States on the Tizard Mission.
19431945 Head of the British Mission to the Manhattan Project.
1945 Knighted.
1946 Returned to England after serving on the Advisory Committee on Atomic Energy and as the British scientific advisor to the United Nations Atomic Energy Commission.
1948 Elected as Master of Gonville and Caius College, Cambridge.
1950 Received the Copley Medal.
1951 Awarded the Franklin Medal.
19571962 Part-time member of the United Kingdom Atomic Energy Authority.
1958 Retired from Mastership.
1974 Jul 24th Died in Cambridge, England.