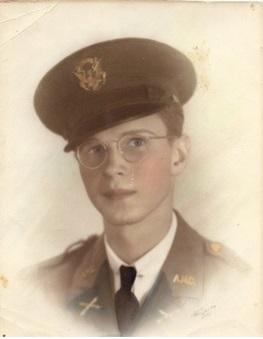 In 1942, James E. Fix, was a 16-year-old freshman at Texas A&M University.  Fix was drafted into the Army, and, after basic training, twenty men in his unit were chosen for the Army Specialized Training Program (ASTP). The rest of the unit went to Europe in 1944 and fought at the Battle of the Bulge. However, Fix and the other nineteen men were sent to Oregon State University for an intensive training program condensed into two semesters.

Once they had completed this training course, the ASTP unit reported to Oak Ridge, Tennessee. From Oak Ridge, they were sent on a series of curruitous train rides on an untraceable route (East, North, and then West) to the top secret scientific compound at Los Alamos, New Mexico. While working on the Manhattan Project all mail sent to the ASTP in Los Alamos had a simple address:  SED 490 (this stood for Special Engineering Detachment).

James Fix’s unit designed and built the detonation device for the atomic bomb. They were given parameters for a high explosive detonation device, but no other components of the bombs. Just like to so many other Manhattan Project workers, Fix didn’t know what he was working on; only that it demanded a detonation device with unprecedented parameters. The ASTP unit was stationed at the S Site outside of Los Alamos as they were dealing with large amounts of high explosives. This was to prevent a potential accidental explosion of dynamite from affecting the rest of the town.

In addition to the design of the detonation device, the ASTP unit had the practical job of assembling it. Fix and a few other men in his unit transported large amounts of dynamite to be used in development, testing, and, ultimately, the final detonation. The ASTP would transport 2,300 pounds of dynamite at a time; a load so heavy that the trucks became difficult to maneuver or stop. Fix once relayed a story to his son, James Fix Jr., about a time that he miscalculated his driving speed and missed a turn. It was ¾ of a mile before Fix Sr. was able to stop the truck to turn around.  When asked if he was nervous transporting all that dynamite, Fix said, “We were just doing our job. “

Individuals who were assigned to possitions as truck drivers had the unique opportunity to drive “between” units. Each unit was kept isolated and they were not allowed to communicate with each other.  These strict protocols ensured that the project would stay confidential. However, the truck drivers were able to see the work of many units, and some of the smarter GI’s started to speculate about what they were building.

When asked if he felt bad being part of such a destructive force that killed so many people Fix said, “We knew that if we had to invade Japan, that they would fight to the death. There would have been tremendous loss of life for Japanese and Americans. When they weighed the options the administration felt that the bomb would cause less loss of life.”

Fix said that he “felt very proud that he was handpicked to be part of this scientific effort.” He felt as though it was an honor. Even after the war ended and the ASTP unit was discharged, the men working on the Manhattan Project were under strict confidentiality agreements. They were not allowed to leave the US for two years after leaving the Army due to secrecy issues.

R. M. Batch worked for the Tennessee Eastman Corporation at the Y-12 Plant.