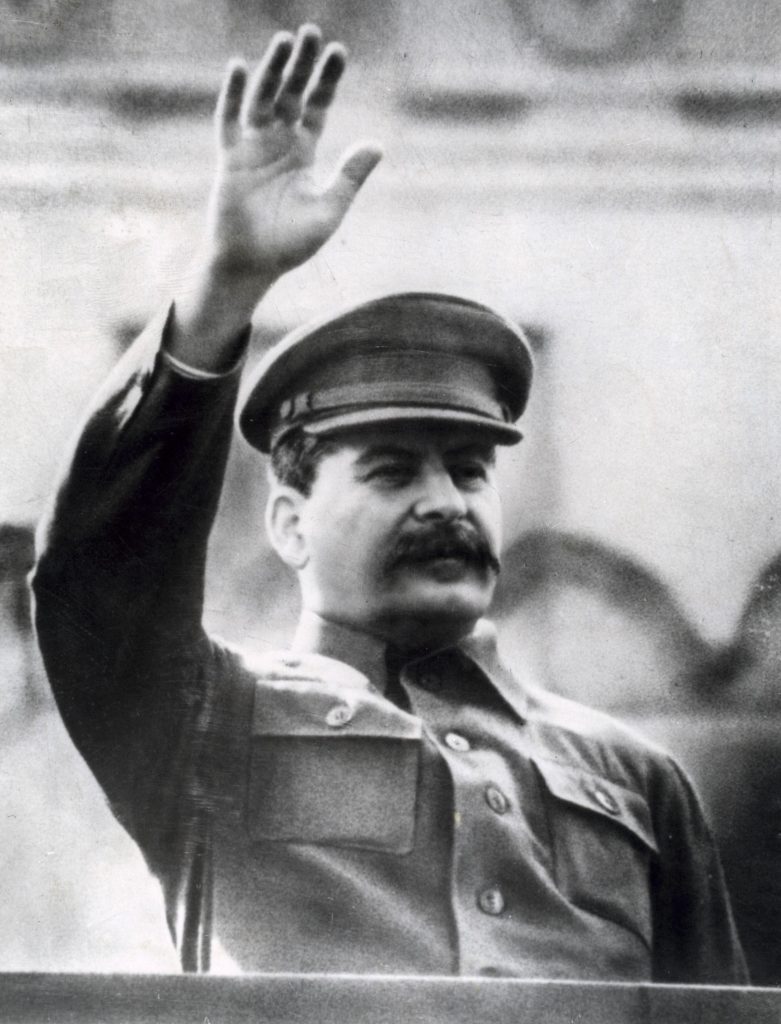 Born Iosif Visarrianovich Dzhugashvili, Joseph Stalin (1878-1953) was the General Secretary of the Communist Party and Premier of the Soviet Union.

Early Life and Rise to Power

Stalin was born in the modern day Republic of Georgia. By most accounts, his father struggled with alcoholism, and Stalin’s family life was unstable at best. He eventually entered seminary school before he became disillusioned with religion and joined the Bolshevik movement. It was during his time as a young Bolshevik activist that he began using the “Stalin” alias, which roughly translates to “Man of Steel.”

Stalin’s ascension to the forefront of the Communist Party mirrored the party’s own expanding influence in Russia. By the time Vladimir Lenin died in 1924, the party was in control of the country and Stalin was in position to lead the party. To do so he defeated other party officials in a power struggle, ultimately exiling his chief rival Leon Trotsky. By the 1930s he had dictatorial control over the new Soviet Union.

Stalin’s time as General Secretary of the Communist Party (which was the country’s de facto head of state, although he would later officially became Premier) was a period of massive change and instability in the Soviet Union. Throughout the 1930s he led infamous “purges” that saw multitudes of political enemies and ethnic minorities imprisoned, exiled, or executed. He was also the catalyst behind efforts to rapidly develop the Soviet Union’s industrial prowess, which threw the country’s economy, which had previously depended on agriculture, into tumult.

At the same time, Stalin dedicated himself to creating a cult of personality. This including attaching his name to many cities, buildings, and monuments. By World War II, Stalin’s name would be included in the Soviet national anthem.

Stalin and the Atomic Bomb

Stalin was keenly focused on the expansion of Soviet ideals around the world. He envisioned a Soviet Union that had the military capability to expand far beyond Russia. As such, he was eager to pursue any possible military development that could give the USSR an edge over other world powers. To that end, the Soviet Union maintained an active espionage program to follow the military activity of the country’s rivals. Through these channels, Stalin became aware of the beginnings of a bomb program in Britain by 1940, with knowledge of the upcoming American program soon to follow. In fact, Stalin was aware of the Manhattan Project’s existence before future President Harry Truman.

After receiving notices from Soviet spies and Soviet physicists who were cognizant of the direction of their field, Stalin began taking steps to creating a Soviet nuclear program. Despite this, he was still skeptical of much of the intelligence he was receiving that directed him to that conclusion, particularly that which would lead him to pricey investments in nuclear physics. As a result, the initial Soviet nuclear program was quite small. It was not until after the first atomic weapon was used at Hiroshima that Stalin fully realized the potential impact that developing nuclear weapons for the Soviet Union could have on international politics.

After the war, Stalin spared no expense on the immediate development of the Soviet nuclear program, even though the country was facing massive amounts of war-related death and destruction. Stalin at one point remarked to Igor Kurchatov, the leading scientist on the Soviet nuclear program, “If a child does not cry, the mother doesn’t understand what he needs. Ask for anything you’d like, you won’t be let down.”

Stalin’s dedication soon resulted in the first Soviet nuclear weapon, “First Lightning,” (nicknamed Joe-1 in the United States) in 1949. The aim of the postwar Soviet nuclear program was to undermine American nuclear hegemony, and that began with ending the American nuclear monopoly. Stalin pursued this criterion for the rest of his life, and the Soviet Union successfully detonated its first hydrogen bomb within months of Stalin’s death in 1953.

For more information on Joseph Stalin and the Soviet nuclear program, click here.

Lavrentiy Pavlovich Beria (1899-1953) was the administrative political director of the Soviet atomic bomb project and chief of the USSR’s secret police.

Robert S. Norris is the author of the definitive biography of General Groves, Racing for the Bomb: General Leslie R.

David Greenglass (1922-2014) was a machinist and member of the Special Engineer Detachment who engaged in espionage activities for the Soviet Union at Los Alamos during the Manhattan Project.

Born Iosif Visarrianovich Dzhugashvili, Joseph Stalin (1878-1953) was the General Secretary of the Communist Party and Premier of the Soviet Union.