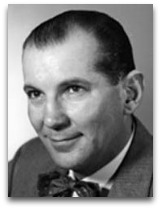 Paul Aebersold (1910-1967) was a nuclear physicist. He wrote his dissertation at Berkeley on “The Collimation of Fast Neutrons” and was involved in the development of the cyclotrons under Ernest Lawrence.

In 1942, he became a special assistant to Lawrence, and was tasked with administering the growth of the Radiation Laboratory at Berkeley. In 1943, he served as head of the Information Division of the Rad Lab. In 1944 he transferred to Oak Ridge, where he was a member of the Research Control Division of the District Engineer’s Office. In June 1945, he was sent to Los Alamos to conduct radiation measurements and health research before and after the Trinity test.

After the war, Aebersold remained at Oak Ridge. He was a pioneer in the radioisotopes work there, retiring as the Director of the Division of Isotopes Development.

Paul Aebersold's Timeline
1910 Jul 7th Born in Fresno, CA.
1932 Received his BA in Physics from Stanford.
1939 Received his PhD in Physics from the University of California, Berkeley.
1942 Worked as a special administrative aid at the Rad Lab.
1943 Served as head of the Information Division of the Rad. Lab.
1944 Jun1945 Jun Worked in the Research Control Division of the District Engineer's Office at Oak Ridge.
1945 Jun Sent to Los Alamos to conduct health and radiation experiments for the Trinity Test.
1946 Feb Became Chief of the Isotopes Branch at Oak Ridge.
19611965 Served as the Director of the Division of Isotopes Development at Oak Ridge until his retirement.
1967 May 29th Passed away.

C. F. Hill served in the 509th Headquarters and Base Services Squadron.