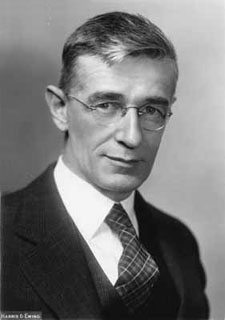 Vannevar Bush (1890-1974) was an American engineer, inventor and science administrator.

In 1940 the National Defense Research Committee was established and President Roosevelt appointed Bush as its president. A year later the Office of Scientific Research and Development was created, absorbing the NDRC, with Bush as director.  This latter organization oversaw the Manhattan Project and the development of the atomic bomb.

In October 1941, Bush informed Roosevelt of the conclusions of the British MAUD Report, which concluded that an atomic bomb was feasible and could be produced in time to affect World War II. In response, Roosevelt gave Bush his approval that fall to construct and develop the bomb. Throughout the war, Bush combined the work of the US military with research from universities, including MIT, Harvard, and the University of California, Berkeley, to speed up improvements in weapons technology. Bush served on the Military Policy Committee, was actively involved in recruiting scientists, and advised Secretary of War Henry Stimson and others on the future international implications of the atomic bomb.

In 1944, Roosevelt asked Bush to suggest future peacetime applications of the technologies developed during World War II. The next year, Bush submitted his famous report “Science, the Endless Frontier,” which led to the creation of the National Science Foundation in 1950. He served on the National Science Foundation’s Advisory Committee for several years, then became chairman of the MIT Corporation, with which he remained involved for the remainder of his life.

In 1945, Bush published the article “As We May Think” in the Atlantic Monthly. This described an imaginary device known as the “memex,” an automated information management system that later inspired many of the creators of the Internet.

Vannevar Bush's Timeline
1890 Mar 11th Born in Everett, Massachusetts.
1913 Graduated from Tufts College with a B.S. and M.S. in electrical engineering.
1917 Received a joint Ph.D. from MIT and Harvard.
1919 Became an associate professor at MIT, helped build an automated network analyzer to solve mathematical differential equations, and later, the first analog computers.
1938 Appointed to the National Advisory Committee for Aeronautics.
1940 Appointed by President Roosevelt as president of the National Defense Research Committee.
1941 Named Director of the Office of Scientific Research and Development.
1941 Oct Informed Roosevelt of the conclusions of the British MAUD Report and the feasibility of the atomic bomb.
19421945 Worked on the Manhattan Project.
1943 Awarded an Edison Medal.
1945 Earned a Public Welfare Medal.
1963 Awarded a National Medal of Science.
1945 Published an article in the Atlantic Monthly called "As We May Think." It later became an inspiration for the creation of the internet.
19471962 On the board of directors for American Telephone and Telegraph.
1955 Retired as president of the Carnegie Institution and returned to Massachusetts.
19431955 Regent of the Smithsonian Institution.
19521959 Director of Metals and Controls Corporation.
19491962 Director of Merck & Co.
19431962 Trustee of Tufts College.
19431955 Trustee of Johns Hopkins University.
19581974 Trustee of the Carnegie Institution of Washington.
19391950 Trustee of the Carnegie Corporation of New York.
19561972 Trustee of the George Putnam Fund of Boston.
1974 Jun 28th Died of pneumonia in Belmont, Massachusetts.

Dr. George Marshall Lyon was an American physician who assisted with radiation safety during the Manhattan Project.

Kenneth Stewart Cole was a Principal Biophysicist at the University of Chicago’s Metallurgical Laboratory (“Met Lab”) during the Manhattan Project.

Albert Myerson was a chemist and research assistant at the SAM Laboratory at Columbia University from 1942 to 1945.