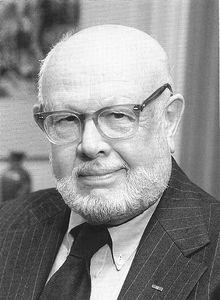 William “Willie” Fowler was an American physicist who won the 1983 Nobel Prize in Physics.

He received his PhD in physics from Caltech. He spent most his career at Caltech, where he became director of the Kellogg Radiation Laboratory. He was friendly with J. Robert Oppenheimer when Oppie was on the faculty at Caltech before the war.

Fowler was an experimental nuclear physicist. His most famous paper (which he co-authored with several other physicists) was “Synthesis of the Elements in Stars.” He won the 1983 Nobel Prize in Physics with Subrahmanyan Chandrasekhar “for his theoretical and experimental studies of the nuclear reactions of importance in the formation of the chemical elements in the universe.”

John Riddle was a research assistant at the Metallurgical Laboratory in Chicago during the Manhattan Project.

Dr. Lauren Donaldson (1903-1998) was an ichthyologist who was hired by the Manhattan Engineering District at Hanford to monitor effects of radioactive contamination in the Columbia River.

Ralph Alexander Gardner-Chavis (1922-) is a chemist and pioneer of hard plastics who worked at the University of Chicago’s Met Lab during the Manhattan Project.

Professor Floyd Owen Slate (1920-2008) worked on the Manhattan Project at Decatur, IL and at Columbia University.