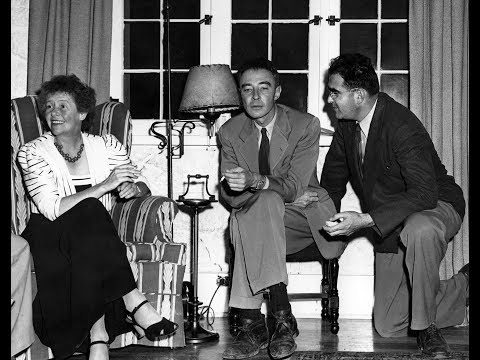 The offices at 109 East Palace Avenue in Santa Fe were the first stop for hundreds of scientists, engineers, Women’s Army Corps, military police and their families heading to the top-secret Los Alamos laboratory.

Narrator: In early 1943, laboratory director J. Robert Oppenheimer used an assumed name to rent the offices at 109 East Palace as the administrative center for the top-secret Los Alamos laboratory. Dorothy McKibbin expertly ran the office and directed the anxious recruits to Los Alamos.

Dorothy McKibbin: We had five offices around that patio. He [Oppenheimer] rented the whole patio for us. He went under the name of “Mr. Bradley” and rented it from Mrs. Field, who owned the whole thing.

These young husbands and wives would come in with their babies on their shoulder and come into our office. We would say, “Hello!” and “How are you?” And take care of their baggage and see if they got a ride up to “the Hill”

You did what you were told. You asked no questions. When I was hired, I was told never to ask a question and to never ask for a name to be repeated.

Narrator: Jon Ruminer describes what would happen after Manhattan Project participants arrived here, in the patio area, at 109 East Palace.

John Ruminer: They would come through a doorway off of East Palace Avenue, they would walk right in front of me here down a pathway, and they would report to Dorothy McKibbin and her office assistants right next door.

Many of them didn’t even know where they were going to go after that. They’d get their orders. They would come in through this door to my left and they would disappear. 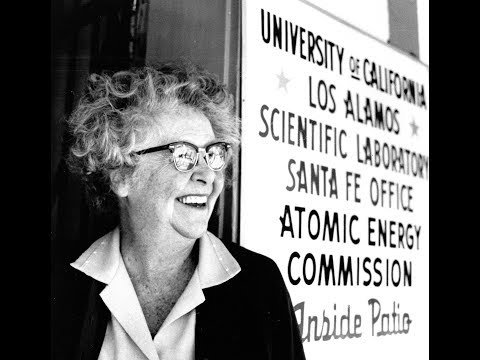 Dorothy McKibbin was an indispensable figure for the Los Alamos laboratory and beloved by many Manhattan Project participants.

Rebecca Diven: Dorothy McKibbin was the lady in charge of 109 East Palace. That’s where everybody went when they arrived. A very warm, generous, smiling woman who immediately put you at ease and said, “I’m so glad to meet you and I hope you love it, and if you need anything, anything at all, let me know.” And she also became a lifelong friend of everybody who ever went through her office.

Dorothy McKibbin: In the stores, if people got lost and didn’t know where to go, they would call me up and say, “Dorothy, there’s a strange-looking man here. He’s lost.”

Hundreds of them came into our office. We averaged about sixty-seven people in there per day and 110 telephone calls per day. We were really very busy. I could not wait to get in there at 8:00. It was hard to get away for the lunch hour.

Then very often, at five my “duties” would extend because there would be people in town that had gotten in too late to go to the Hill. I would show them around, or they would come out here and we would have a cup of tea or something. It was all terribly pleasant and never-ending.

Jennet Conant: She had this wonderful personality. She was a sort of eternally optimistic, buoyant woman. Very upbeat. Somebody described her as having kind of the efficient no-nonsense Girl Guide personality. She had a natural “take-charge” demeanor.

She also said—which I sort of love and shows you a little bit of the mischievousness of her personality—she liked being queen bee of 109 East Palace and running her whole operation. She had a pretty keen sense that being in charge here and, as she put it, being the gatekeeper to the laboratory, was the job that she wanted to keep.

Narrator: McKibbin ran 109 East Palace for twenty years, until her retirement in 1963. Today, a plaque commemorates the building’s role in the Manhattan Project.