A little-known operation of the Manhattan Engineering District took place behind enemy lines in occupied Europe. Code-named the “Alsos” Mission, these intelligence-gathering operations moved with the advancing Allies to learn firsthand how close Germany was to developing its own atomic weapon. Under the command of General Leslie Groves, these operations succeeded in capturing most of the key German scientists, stores of uranium ore and other nuclear raw materials, and thousands of research documents regarding the development of atomic energy.

Fear of a Nazi Atomic Bomb

When Otto Hahn and Fritz Strassmann split the first uranium atom in Nazi Germany on December 21, 1938, top physicists quickly realized the possibility of creating an atomic device that could unleash energy and destruction of unfathomable proportions. Many of these scientists had already fled Nazi Europe and immigrated to Great Britain or the United States. A number of top nuclear physicists, including Leo Szilard, Enrico Fermi, and Emilio Segre, were extremely worried about a German effort to build an atomic bomb and worked feverishly to alert President Roosevelt and top administration officials to the possibility that Germany might have as much as a two-year lead in the development of a nuclear weapon. Unless the United States had positive knowledge to the contrary, they assumed that the most competent German scientists and engineers were working on an atomic program with the full capacity of German industry at their disposal.

It was therefore critical that United States intelligence officials learn as much as they could about Germany’s progress on an atomic weapon. This objective would prove unusually complex, however, because the cloak of secrecy around the Manhattan Project was so complete that military intelligence could not be told anything about atomic energy and thus would not have the information required to be able to analyze German progress.

Creation of the Alsos Mission 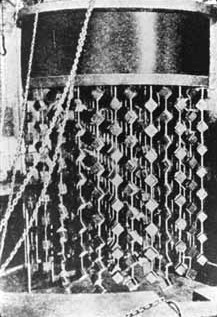 The solution presented itself in the fall of 1943 when General Marshall suggested that a separate intelligence operation under the auspices of the Manhattan Engineer District be established. The following excerpt from a memo by General George Marshall in late 1943 formalized the plan and established the Alsos Missions: “It is proposed to send at the proper time to allied occupied Italy a small group of civilian scientists assisted by the necessary military personnel to conduct these investigations. Scientific personnel will be selected by Brig. Gen. Leslie R. Groves with the approval of Dr. (Vannevar) Bush and military personnel will be assigned by the Asst. Chief of Staff, G-2, from personnel available to him….This group would form the nucleus for similar activity in other enemy and enemy-occupied countries when circumstances permit.”

The Alsos Missions of the Manhattan Project were conducted in three phases: Phase I – Italy; Phase II – France; and, Phase III – Germany. In addition there was a headquarters mission established in London. The original detachment forming the missions consisted of thirteen military personnel, including interpreters and six scientists. The team members were generally familiar with the research programs of both the United States and Great Britain and were capable of extracting through interrogation and observation detailed scientific information on atomic energy. From the beginning, Alsos was commanded by Lt. Col. Boris T. Pash. Eventually Dr. Samuel Goudsmit came aboard as chief of the scientific component.