Los Alamos, New Mexico, was the site of Project Y, or the top-secret atomic weapons laboratory directed by J. Robert Oppenheimer. The site was so secret that one mailbox, PO Box 1663, served as the mailing address for the entire town. The mountains allowed the scientists ample opportunity to relax, by skiing, swimming, and hiking. But they spent most of their time in laboratories, overcoming challenge after challenge to develop the Littly Boy (gun-type) and Fat Man (implosion) atomic bombs.

The ancient Ancestral Pueblo people considered the Pajarito Plateau the center of the universe. To the east are the majestic Sangre de Cristo Mountains, the southern part of the Rocky Mountains, and to the west, the Jemez Mountains.

At 7,300 feet above sea level, the Pajarito (Spanish for “Little Bird”) Plateau provides stunning views high above the Rio Grande. The Plateau was home to the Ancestral Puebloan culture more than eight centuries ago. 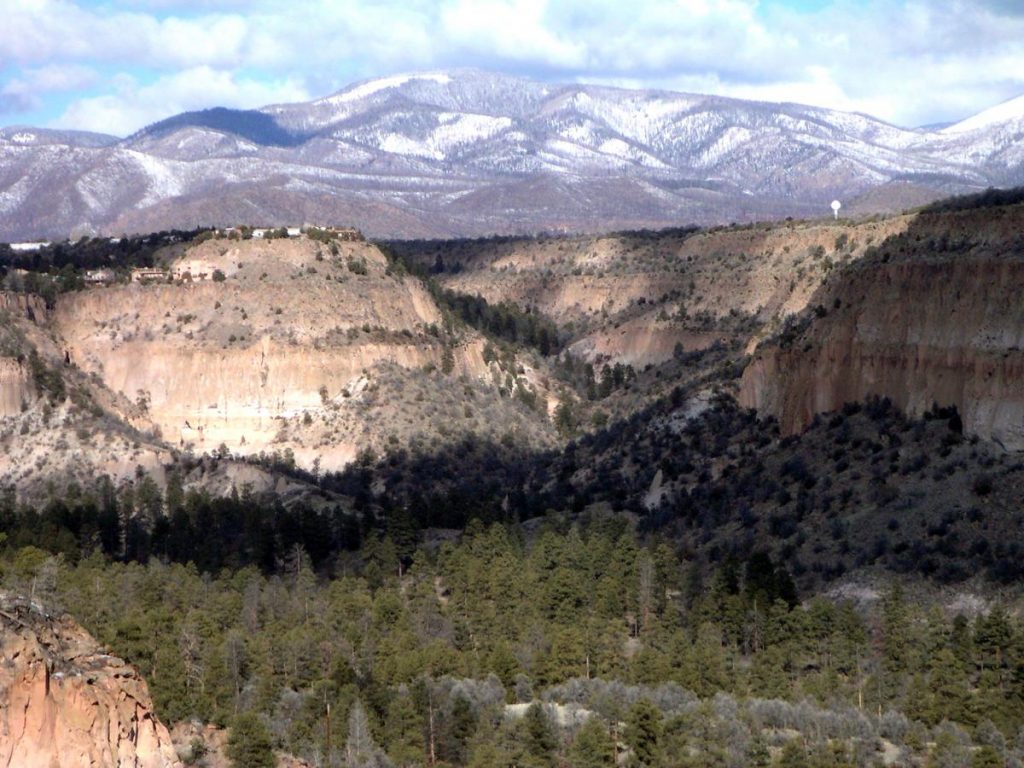 The Pajarito Plateau is primarily composed of orange-pink rock or ignimbrite. The rock was formed when the nearby Valles Caldera volcano erupted over one million years ago. With an average of 14 inches of rain a year, it is an ecologically fragile high desert.
The Ancestral Puebloan civilization began in 1200 BC in the Four Corners area and eventually extended to large parts of Arizona, Utah, Colorado and New Mexico. From 850 AD, Chaco Canyon, now a National Historical Park and World Heritage Site, was the hub of ceremony and trade for the prehistoric Four Corners area for 400 years.

The Ancestral Pueblo people settled along the Rio Grande and on the Pajarito Plateau between the years 1175 and 1250 AD, building homes along canyon walls and farming beans, corn and squash on the mesa tops. Visitors can see the remains of their dwellings and artifacts in what is now Bandelier National Monument.
Archaeologists believe that droughts and intertribal warfare forced the inhabitants of the Pajarito Plateau to leave for more fertile ground near the Rio Grande. By 1550, they had abandoned the plateau. Among the descendants of the Ancestral Pueblo people are the eight Indian Pueblos in northern New Mexico, including the San Ildefonso, Ohkay Owingeh, Santa Clara, Pojoaque, Tesuque, Nambé, Picuris and Taos, as well as the Cochiti and the Jemez Pueblos.
In the sixteenth century, the Spanish brought horses, guns and the Catholic religion up from Mexico. The Province of New Mexico (now New Mexico and Arizona) became part of New Spain. Santa Fe was declared the capital in 1610 and has remained an important center of government, trade and culture for more than four centuries.

Descendants of the early Spanish settlers began settling the Pajarito Plateau in the nineteenth century. Beginning in 1821, the Santa Fe Trail brought thousands of people to northern New Mexico. The incorporation of the Territory of New Mexico into the United States in 1848 spurred further development. In 1878, the Santa Fe Railway reached New Mexico. In 1912, New Mexico became the forty-seventh state, with a population of 327,000.
Under the Homestead Act, U.S. citizens could claim 160 acres of land in exchange for living there for five years. Homesteaders Victor and  Refugio Romero and their six children built a cabin on the Pajarito Plateau in 1913. The recently restored cabin is one of two remaining from the homesteading era on the Pajarito Plateau.
In the early 1920s, New Mexico became a haven for “health seekers.”  The altitude, air quality, plentiful sunshine and mild climate seemed to promote recovery of all kinds of health troubles. Many artists and writers who came to New Mexico for health reasons never left.

J. Robert Oppenheimer was one of the health seekers. In 1922, his parents arranged for the 18-year-old to spend the summer in New Mexico to recover his strength after a near-fatal case of dysentery. Robert stayed at a dude ranch 25 miles northeast of Santa Fe with high school teacher Herbert Smith as a companion and mentor. From there, he took five- or six-day horseback trips through the surrounding wilderness, camping out in the rugged mountains. This experience restored Oppenheimer’s health and instilled a deep love for the desert high country. He returned to northern New Mexico repeatedly, bringing his brother Frank and many friends.
By 1942, Oppenheimer was one of the world’s leading theoretical physicists at the University of California, Berkeley. When he was appointed scientific director of a top-secret weapons project, he suggested the Los Alamos Ranch School as an ideal site for the laboratory. In early 1943, the school turned over its 800 acres to the secret project. The Pajarito Plateau soon became the center of an effort that would harness the energy of the atom. For Oppenheimer, it was a marriage of his two great loves, physics and New Mexico.os Alamos Ranch School as an ideal site for the laboratory.
Physicists, chemists, metallurgists, explosive experts and military personnel converged on the isolated plateau. At times, six Nobel Prize winners gathered with the other scientists and engineers in the weekly colloquia organized by Oppenheimer. Meanwhile, the Army was charged with supporting the work, building buildings, keeping the commissary supplied, and guarding the top-secret work.
Hurriedly built, huge laboratory buildings sprawled along the south side of Ashley Pond. Rows of four-family apartments strung to the west toward the mountains. A few board sidewalks raised residents up out of the mud that was prevalent in winter when snow melted and in summers during the afternoon monsoons.
Source:
Atomic Heritage Foundation's "A Guide to the Manhattan Project in New Mexico"
Address:
Los Alamos NM, 87544 US
Subjects:
Tags: