Tinian Island was the launching point for the atomic bomb attacks against Hiroshima and Nagasaki, Japan. One of three islands in the Northern Marianas, Tinian is less than forty square miles in size and located approximately 1,500 miles south of Tokyo. The round-trip flight from Tinian to Tokyo took B-29s an average of twelve hours. This proximity to Japan is one reason Tinian served as the headquarters of the 509th Composite Group. 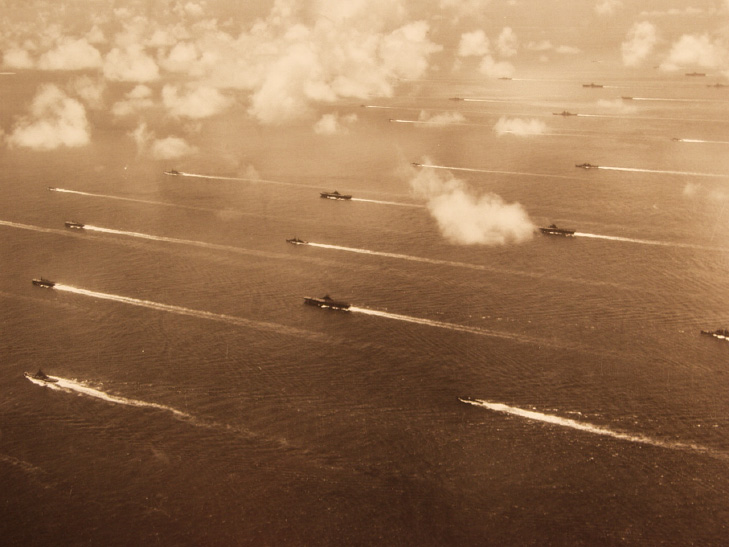 The Battle of Tinian

Tinian, easy to supply by sea and perfect for launching air attacks against Japan, was desired by the U.S. military because of its key strategic importance.

The taking of Tinian was preceded by the invasion of Saipan, also part of the Marianas, on June 15, 1944. Fierce fighting by the 10,000 Japanese army men and the mass civilian suicides on Saipan left U.S. generals with a stark understanding that Japan would not fall easily. The invasion of Tinian, which began June 24 and ended August 1, was similarly difficult – over 300 Americans and 6,000 Japanese lost their lives. The U.S. military referred to Tinian with the codename “Destination.”

Navy construction battalions known as the SeaBees began bulldozing mere days after the island was secured. Six runways were completed within two months and Tinian soon became the biggest air base in the world. North Field consisted of four airfields and supported 269 B-29s.

Tinian was the forward operational base from which bombers flew to Japan. The Twentieth Bomber Command launched relentless attacks on the Philippines, Okinawa, and mainland Japan. The ground literally shook as planes took off every minute of every day.

Because the round trip to Japan was close to 3000 miles, all bombers that took off from the island had to be overloaded with fuel. This requirement made takeoff crashes common – a problem that planners of the atomic bomb had not anticipated. While Little Boy, a simple “gun-type” uranium bomb, would not have exploded had the Enola Gay cashed, Fat Man, a more complicated plutonium bomb that had to be fully armed before takeoff, could have. In a letter to J. Robert Oppenheimer on August 9, 1945, Columbia scientist Dr. Norman Ramsey suggested that modifications be made to the B-29s.

Tinian was chosen as the base of operations for an atomic attack against Japan in February of 1945. Preparations for the assembly of atomic bombs and the readying of the 509th Composite Group began on April 3. Prior to being sent to Tinian, the 509th practiced accurate bomb dropping in Wendover, Utah. All the bomber groups on Tinian, except the 509th, were involved in the devastating incendiary bombing raids launched against Tokyo – the 509th would only be utilized for the secret atomic bombing mission.

Oppenheimer believed that fifty atomic bombs would be needed to defeat Japan. Scientists and military figures considered them as nothing more than large-scale conventional weapons. Each atomic bomb could accomplish what took a week with conventional bombing and, as the radiation effect was still unknown, there seemed no reason to withhold using them. Members of the 509th were informed that their stay on Tinian would be a long one.

On August 5, 1945, a B-29 was maneuvered over a bomb loading pit and then taxied to to Runway Able at North Field. At 2:45am on August 6, the B-29 – piloted by Colonel Paul Tibbets of the US Army Air Force, who had named the plane after his mother, Enola Gay – took off. On August 6 at 8:15 am Hiroshima time, the bomb – named Little Boy by the Enola Gay’s crew – was dropped on Hirsohima. A minute later, the bomb exploded.

Useful to the Very End

The great destruction of the atomic attacks on Hiroshima and Nagasaki did not immediately spur Japan to surrender. On August 14 it was decided that an additional attack was necessary. Hundreds of B-29s from Guam, Saipan, and Tinian – loaded with powerful Torpex bombs – converged on the Japanese city of Koromo to deliver the last attack of the war. The Japanese surrendered unconditionally the next day.