The story of Los Alamos began with a boom: a volcanic blast over one million years ago. A series of eruptions from the Valles Caldera laid down layers of ash that were slowly shaped into the mountains and mesas of the Pajarito Plateau. In the years since, the plateau has been home to a number of inhabitants, from the Ancestral Pueblo Indians to homesteaders to the scientists of the Manhattan Project, who have each uniquely shaped the landscape and history of the area.

The Settlers of Los Alamos

While human presence in the area has been dated back over 10,000 years, the earliest permanent settlers of the Pajarito Plateau arrived around 1200 A.D. These Ancestral Puebloans built their homes into the sides of the cliffs, and farmed beans, corn, and squash on the tops of the mesas. A second migration brought settlers from the Four Corners area to the Pajarito Plateau around 1300. These new settlers introduced the Tewa language to the region, and built large communal buildings on the clifftops. 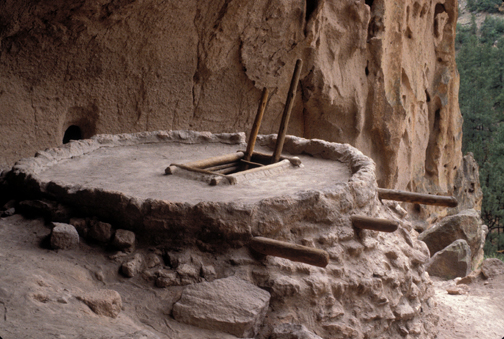 By 1550, however, these settlements had largely been abandoned. Soon after their arrival, the Puebloans suffered from droughts and raids by other local communities, including the Navajos, Utes, Apaches, and Comanches. A shift to a cooler climate, which shortened the growing season and led to food shortages, may have also helped drive the Puebloans from their homes. Leaving the plateau behind, these groups traveled to the nearby Rio Grande valley.

Though abandoned by the end of the sixteenth century, the area was forever changed by these peoples. Their cliff dwellings and paintings dot the landscape, and northern New Mexico is still home to many groups descended from these Ancestral Puebloans.

As the Puebloan people left, the Spanish arrived, bringing horses, guns, and Catholicism up from their posts in Mexico. The Province of New Mexico was established in 1598, and in 1610 the new city of Santa Fe was declared its capital. Descendants of these early Spanish settlers began settling on the Pajarito Plateau in the nineteenth century.

The Homesteaders of Los Alamos

Until the nineteenth century, northern New Mexico remained relatively isolated. However, new transportation routes helped open the area up for settlement. In 1821, the Santa Fe Trail brought thousands of people to Northern New Mexico. The Province of New Mexico became the Territory of New Mexico in 1848, part of the Mexican Cession following the Mexican-American War, spurring interest in the region by white American settlers. In 1878, the first railroad thundered into the territory. A few years later, the “Chili Line,” operated by the Denver & Rio Grande Railway, reached the Pajarito Plateau, allowing unprecedented access to the Española Valley. The influx of people set the stage for a new era in the region, one dominated by homesteaders instead of settlers.

The U.S. Homestead Act, first passed in 1862, provided 160 acres of land to United States citizens who were willing to settle there for at least five years. Local cattle drivers who had been grazing their cattle on the Pajarito Plateau built small one-room cabins to establish their claims to the land, while others from around the country traveled in by rail to make claims of their own. Cabins on the plateau were generally used as summer homes, left empty in the cold winter months when their residents moved to the Rio Grande valley.

New Mexico was admitted to the United States as the forty-seventh state in 1912. The next year, homesteaders Victor and Refugio Romero built a cabin at Los Alamos. Like many other Hispanic homesteaders, the Romeros and their six children inhabited the cabin from April to November. On their fifteen-acre farm, the Romeros planted corn, beans, and melons, and kept chickens, cows, pigs, and horses. The cabin had one room, and was filled with homemade furniture and a cast-iron stove. The property also had a corral and grain shed.

The Romeros rebuilt their cabin in the 1930s, replacing the original roof with a shed-style one. In the 1940s, they were forced to sell their land like many other homesteaders to make way for the labs of the Manhattan Project, but the cabin remained. It was moved to downtown Los Alamos in 1984 and was rebuilt by the Los Alamos Historical Society. The Romero Cabin is one of only two remaining structures from the Homesteading era on the Pajarito Plateau, offering a glimpse into the history of Los Alamos before the Manhattan Project.

Another homesteader, Harold H. Brook, built several cabins, sheds, and barns on his land in the early 1910s. Brook then sold the land and these buildings to Ashley Pond, a Detroit entrepreneur and former Rough Rider whose new business venture was a progressive school for boys. The Los Alamos Ranch School, as it would come to be called, opened in 1917. The school’s mission was to help shape strong young men through a combination of rigorous outdoor living and classical education.

In the early twentieth century, New Mexico became a haven for large numbers of people seeking healthy air and an escape from the growing cities in the east. This mentality brought many people to Los Alamos, including students and teachers at the Los Alamos Ranch School and J. Robert Oppenheimer, who would later help select the site for and direct the Los Alamos laboratory.

The Los Alamos Ranch School emphasized both physical and mental growth. Pond also wanted the young boys to be free of female influence and to improve their health away from the polluted urban areas of the rapidly growing United States. To manage the school, he hired A.J. Connell, a forest ranger and Boy Scout leader who had traveled from New York to New Mexico looking to improve his health and never left. Connell emphasized discipline, integrating the school with the Boy Scouts. The local troop, Los Alamos Troop 22, became the first mounted Boy Scout troop in the country. Connell also emphasized academic preparation, recruiting young graduates of elite eastern colleges to come teach at the new school. The students came from predominantly wealthy families, and spent their time on community service projects, sporting activities, and classical study.

The Los Alamos Ranch School lasted for twenty-five years, and educated over 200 boys. On December 7, 1942, a letter arrived from Secretary of War Henry L. Stimson, announcing that the U.S. Army was taking over the school’s property in “the interests of the United States in the prosecution of the war.” For more information on the selection of the site and the Los Alamos Ranch School, see AHF and the Los Alamos Historical Society’s “Ranger in Your Pocket” programs on Los Alamos and the Hans Bethe House. For more on the displacement of local residents, click here.

The Scientists of Los Alamos

The Los Alamos laboratory of the Manhattan Project opened its doors in 1943. The students at the Los Alamos Ranch School hurried to finish their school year by February, and both the school and the homesteaders were displaced from the land to make room for the sprawling war effort. The military occupation of Los Alamos turned the town into a “secret city” and the birthplace of the atomic bomb.

Since World War II, the story of Los Alamos has been inextricably tied to another boom: the development of nuclear weapons. After the war, the scientists at Los Alamos continued their work on nuclear weapons, and beginning in 1947 the newly created Atomic Energy Commission took control of the site and the town. The AEC continued to build the town of Los Alamos to help support the new Los Alamos National Laboratory facilities. In 1957, the security gates were removed, and over time the government began selling pieces of the town to private individuals. “The community is excited about the transfer of ownership,” The New York Times reported in 1964. “The residents will have an op­portunity to build and live in their own homes, instead of hav­ing to rent the hastily erected Government houses. They will be able to make their own decisions regarding local self‐gov­ernment, and, significantly, they will be able to change the appearance of their city.”

Fuller Lodge, built for the Los Alamos Ranch School in 1929

Los Alamos on the Pajarito Plateau