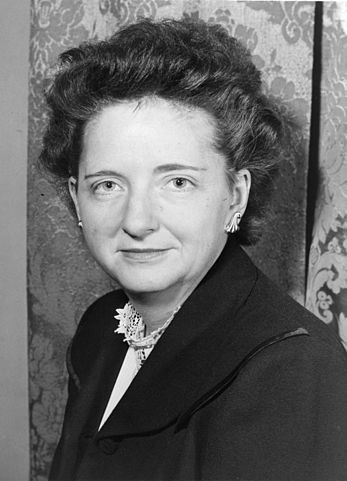 Elizabeth Bentley (1908-1963) was an American communist and Soviet spy. She worked closely with Jacob Goros to manage the Communist Party USA (CPUSA) network of KGB sources and spies. In 1945, she defected and confessed her involvement with the KGB to the FBI. In her FBI deposition, she also named forty-one Soviet spies and sources living and working in the United States.

Shortly after joining the CPUSA in 1936, Bentley was introduced to Juliet Stuart Poyntz-Glazer, a leader in the CPUSA and Soviet spy. Poyntz attempted to get Bentley to become a spy, but after learning about the job’s possible extreme methods, such as sleeping with enemies, she was no longer interested.

On October 15, 1938, Bentley met Jacob Golos, who would eventually become her boss. Golos convinced her to become a spy for the Soviets and work with him in forming a network within the CPUSA.

Although Bentley was formally Golos’ chief assistant and courier, in reality, she was more involved with him and his work than the title may suggest. Bentley served as Golos’ agent handler, as well as his lover. Her role allowed her to become privy to various details and sources in Golos’ spy network.

After the FBI began surveillance on Golos, they noted a meeting between Golos and Bentley outside of her offices at U.S. Services and Shipping Corporation (USSSC). Suspecting she might be a Soviet agent, the FBI began to follow Bentley and continued to do so until August 20, 1941. Following Golos’ death in 1943, Bentley took over Golos’ duties, including the management of the Perlo spy group, which included its namesake Victor Perlo and five other Soviet spies.

According to historian John Earl Haynes, the KGB wanted to “professionalize things and eliminate amateurs like Elizabeth Bentley.” She was also disfavored for her American, rather than Russian, background. Bentley initially resisted, but by the end of 1944, she had handed over most of the agents in her network.

While her formal espionage ties with KGB were disconnected, Bentley was still seen as a threat to the KGB because of her knowledge and role at the USSSC. In November of 1944, the Moscow KGB Center sent Anatoly Gorsky, who attempted to get Bentley to stop working at USSSC, break ties with the CPUSA, and go underground with a new identity.

In removing Bentley from the USSSC and KGB operations, the KGB only increased Bentley’s personal frustrations and issues with alcoholism. Gorsky and the KGB tried to placate her with awards, money, and vacations, but nothing seemed to work.

In November 1945, Bentley was led by a combination of her anger toward the KGB, alcoholism, and extreme paranoia to voluntarily confess her espionage activities to the FBI. Bentley provided the FBI with a complete and signed 108-page confession on November 30, 1945. In the document, she summarized her career as a Soviet spy and identified a number of sources she and Golos provided for the KGB.

J. Edgar Hoover, the head of the FBI, shared a copy of Bentley’s deposition with William Stephenson, chief of British Security Coordination, who forwarded the news to London. This transmission was picked up by Kim Philby, one of the Cambridge Ring KGB spies, and he forwarded a summary to KGB headquarters in Moscow on December 4, 1945. Bentley’s deposition exposed forty-one Soviet sources to the FBI, including Victor Perlo, Harry Dexter White, and Nathan Silvermaster.

The Moscow Center urged its KGB officers in America to stop contact with certain sources, deny ties to Bentley, destroy documents, and lay low. They also ordered Gorsky, who was probably compromised by the FBI, and other close acquaintances with Bentley to return to Moscow. Before returning to Moscow, Gorsky discussed the possibility of killing Bentley with poison or other methods. All assassination methods seemed too messy or unlikely, so nothing was done.

By receiving word about Bentley’s deposition almost immediately, the KGB was able to prepare its agents for FBI interrogation, which ultimately helped prevent many of them from being criminally charged. The halt of work and recall of many agents, however, greatly damaged the progress of Soviet espionage in the early Cold War period.

Elizabeth Bentley was born on January 1, 1908 in New Milford, CT. Her father was a dry-goods merchant and her mother was a school teacher. As a child, her family moved around the Northeast before settling in Rochester, New York. Bentley attended Rochester’s East High School, and in 1926, she won a scholarship to attend Vassar College. She graduated from Vassar with a degree in English, Italian and French.

After Vassar, she became a teacher at Foxcroft Preparatory and Finishing School For Girls (today, known as the Foxcroft School) in Middleburg, Virginia. In 1932, she decided to return to school and study at Columbia University.

Following studying at Columbia, Bentley traveled and lived in Florence, Italy. While living in Florence, she became a supporter of Mussolini and joined the Gruppo Universitate Fascisti in 1934. During her time in Italy, she also had an affair with renowned literary critic Mario Castella, whose left-wing political views may have helped Bentley change her political stance. Upon her return to the United States, Bentley was an anti-fascist.

Acting on her new political views, she joined the American League against War and Fascism, which was an organization set up by the CPUSA. She soon joined the CPUSA.

In 1948, Bentley along with Whittaker Chambers, another Soviet spy defector, testified publically about the Soviet intelligence’s infiltration of American government and society. At the same time, congressional investigations revealed the CPUSA’s role in Soviet espionage and worked to damage the American Communist movement. Bentley’s testimony remains controversial today and was largely unsubstantiated until the release of the declassified Venona transcripts in 1995.

Bentley decided to write an autobiography of her life and time as a Soviet spy called Out of Bondage (1952). In June 1951, her book was serialized in McCall’s Magazine. In her writings, she blamed Golos for influencing her to become a spy.

In February 1953, Bentley began to teach political science at the College of the Sacred Heart in Grand Coteau (Louisiana). She later taught at the Cathedral School of St. Mary on Long Island. After her photo appeared next to the movie review of The FBI Story in January 1957, she was identified by her students and some parents protested her role as a teacher. She was fired in the summer of 1957.

In the fall of 1959, Bentley took a teaching job at Long Lane School. The school was a penal institution for girls in Middletown, Connecticut.

At the age of fifty-five, she died from abdominal cancer on December 3, 1963.

Elizabeth Bentley's Timeline
1908 Jan 1st Born in New Milford, CT.
1926 Won a scholarship to attend Vassar College.
1930 Graduated from Vassar with a degree in English, Italian and French.
1932 Studied at Columbia University.
1934 Lived in Florence, Italy and joined the Gruppo Universitate Fascisti.
1936 Joined the CPUSA.
1938 Oct 15th First met Jacob Golos.
1943 Golos dies and Bentley takes over his CPUSA spy network.
1944 Turns over most of her agents to KGB supervision.
1944 Nov Moscow Center sends Anatoly Gorksy to stop Bentley from continuing to work at USSSC and convince her to break ties with the CPUSA.
1945 Nov Bentley confesses to the FBI.
1945 Nov 30th Signs a 108-page deposition about her involvement with the KGB and provides a list of forty-one Soviet sources and spies.
1945 Dec 4th Moscow Center receives news of Bentley's deposition.
1948 Testifies in front of the House Committee on Un-American Activities.
19511952 Writes her autobiography, "Out of Bondage." Serialized in McCall's Magazine in June of 1951 before book publication in 1952.
1953 Feb Began to teach political science at the College of the Sacred Heart in Grand Coteau in Lousiana.
1957 Jan Her photograph appears next to movie review of "The FBI Story," which causes her to come under question as a teacher at the Cathedral School of St. Mary on Long Island. She is fired in the summer of 1957.
1959 Began teaching at the Long Lane School in Middletown, CT.
1963 Dec 3rd Died of abdominal cancer at the age of fifty-five.

Bob Cook is a nuclear engineer and consultant. He began his career by earning a B.A. in Physics from Washington University.

Lester Skaggs (1911-2009) was an American physicist. Skaggs was born in Missouri, where he grew up on a farm.

John Lansdale (1912 – 2003) was a colonel in the US Army. Lansdale first learned of the Manhattan project from National Defense Research Committee Chairman James B.