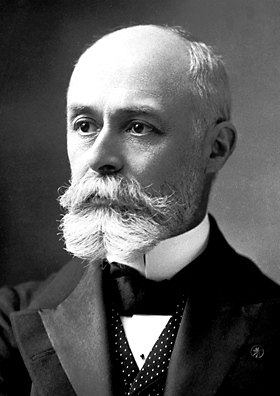 Antoine Henri Becquerel (1852-1908) was a French physicist and winner of the 1903 Nobel Prize in Physics. Becquerel was born in Paris, France on December 15, 1852. He was the son of a professor of applied physics, Alexander Becquerel.

He began his studies in 1872 at École Polytechnique just south of Paris. After a couple of years, he began working for the French government’s Department of Roads and Bridges. In 1894, he was appointed chief engineer of the department. Becquerel received a Doctor of Science degree in 1888. He later became Professor of Applied Physics in the Department of Natural History at the Paris Museum, a post his father had held previously. In 1895, he was appointed Professor at École Polytechnique.

In 1896, Becquerel discovered natural radioactivity. Earlier that year, German physicist, Wilhelm Röntgen discovered x-rays. A type of phosphorescence had been present in vacuum tubes during Röntgen’s experiment. This caused Becquerel to wonder if there was any link between x-rays and naturally occurring phosphorescence. He conducted an experiment on uranium salts, which he inherited from his father. He hypothesized that the uranium would absorb light and reemit it as x-rays. He put the uranium on photographic plates. He developed the plates and observed that the uranium had, in fact, emitting radiation similar to x-rays.

However, on a cloudy day in March, Becquerel decided to develop photographic plates of uranium that had not been exposed to sunlight. He found that even without contact to sunlight, the uranium was emitting radiation. While Becquerel initially believed the rays he was observing were similar to x-rays, further experiments should that unlike x-rays, the magnetic and electric fields of these rays could be deflected. Becquerel had, in fact, discovered radioactivity.

In 1903, Becquerel received the Nobel Prize in Physics for his research on radioactivity along with Pierre and Marie Curie.

Charles W. Hagen was a research assistant at the University of Chicago’s Metallurgical Laboratory (“Met Lab”) during the Manhattan Project.

Rachel “Rae” Erlanger worked on the Manhattan Project for the Kellex Corporation. She grew up in New York City.

Albert Tannenbaum was a research associate at the Metallurgical Laboratory in Chicago during the Manhattan Project.