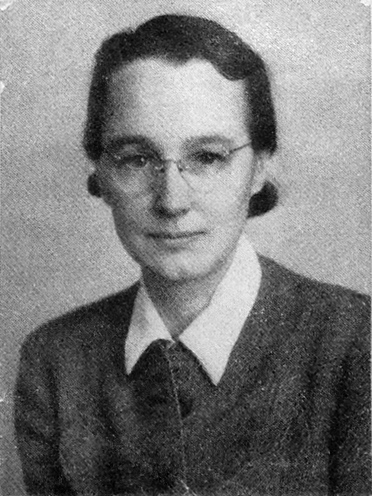 Myrtle Claire Bachelder was an American chemist and Women’s Army Corps officer stationed in Los Alamos during the Manhattan Project.

Born in Orange, Massachusetts, Bachelder graduated with a Bachelor of Science degree from Middlebury College in 1930. She worked as a high school science teacher and athletics coach in South Hadley Falls, Massachusetts, while earning her Master of Education degree from Boston University, which she received in 1939.

In November 1942, Bachelder enlisted in the Women’s Army Corps. After her training, she was assigned to the Company D WAC Detachment of the Manhattan District. Bachelder was assigned to lead a group of women from the WAC to Los Alamos. After the group arrived in October 1943, Bachelder and her group used spectroscopy to measure the purity and composition of the uranium coming into Los Alamos. Her discoveries, which included techniques for x-radiation and purification of uranium ores, were acknowledged after the war, when the Atomic Energy Commission declassified a number of documents relating to the Manhattan Project. Bachelder was a vocal supporter of the creation of the AEC and the civilian control of nuclear research.

After the war, Bachelder joined the Institute for the Study of Metals at the University of Chicago (later named the James Franck Institute after the Nobel Laureate and former Director of the Chemistry Division at the Metallurgical Laboratory during the Manhattan Project) as a research chemist. There she joined Norman Nachtrieb, whom she had worked for at Los Alamos. She continued her research in metallochemistry, developing methods for the purification of tellurium and indium. Bachelder also worked in marine archaeology determining the chemical composition of cannons found on sunken ships in the Aegean Sea. Later Bachelder also worked for NASA analyzing the chemistry of Moon rocks collected during the Apollo missions.

Myrtle C. Bachelder's Timeline
1908 May 13th Born in Orange, Massachusetts.
1930 Received B.S. from Middlebury College.
1939 Received M.Ed. from Boston University.
1942 Nov Enlisted with the Women's Army Corps.
1943 Oct Arrived in Los Alamos.
19461973 Worked as a research chemist at the Institute for the Study of Metals (later renamed the James Franck Institute) at the University of Chicago.
1997 May 22nd Died in Chicago, Illinois.

Robert Coveyou worked for Clinton Laboratories at the X-10 Reactor.