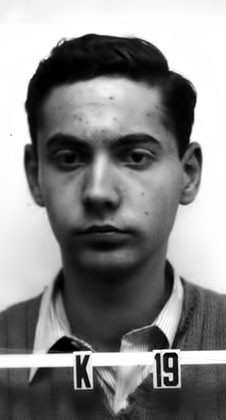 Theodore “Ted” Hall (1925-1999) was an American physicist and an atomic spy who passed along detailed information about the implosion-type “Fat Man” bomb and several processes for purifying plutonium to the Soviet Union.

Hall was raised in a wealthy Jewish family in New York City. As a young teenager, Hall demonstrated considerable aptitude in mathematics and science. In 1937, he attended Townsend Harris High School for gifted boys and was later accepted into Queen’s College at the age of fourteen. Hall later transferred to Harvard University in 1942, where he graduated with a degree in physics at the age of eighteen.

Hall was the youngest scientist to be recruited to work on the Manhattan Project at Los Alamos. He was responsible for carrying out experiments for the implosion-type bomb “Fat Man” and helped determine the critical mass of uranium needed for the gun-type bomb known as “Little Boy.”

While on vacation in New York City in October 1944, Hall visited the Communist Party of the United States of America’s office in New York in order to establish a contact to pass information on the Manhattan Project along to the Soviet Union. He eventually met with Sergey Kurnakov, a military writer for a Soviet paper, and passed him a report on the scientists who worked at Los Alamos and the basic science behind the implosion bomb.

Hall’s report eventually made its way to the Soviet Consulate in New York, where Anatoly Yatskov, the New York station chief, transmitted the information to the NKVD in Moscow using a one-time pad cipher. Hall was officially made an informant for the Soviet Union and received the code-name MLAD (“Young”).

After World War II, Hall left Los Alamos for the University of Chicago, where he continued to pass along information to the Soviet Union about a new type of nuclear weapon (hydrogen bomb) being developed at the University. Hall eventually moved to England, where he began research at Cambridge University and developed a new method for examining thin sections of biological tissue.

Hall was never convicted of espionage. He was questioned briefly by the FBI in 1951, but was never charged. In 1997, Hall admitted that he felt strongly that an American monopoly on nuclear weapons was perilous and that atomic information should be shared between countries.

Richard Recker served in the Special Engineer Detatchment (SED) at Los Alamos during the Manhattan Project.

B. B. Hoskins worked for the Comstock-Bryant Electric Company.