Radiation is a common tool in medicine, and has been for over a century. The Manhattan Project produced a large number of radioactive substances, and as a result scientists intensified research into the overlap of nuclear science and medicine. On one side of this overlap was health physics, which concentrated on keeping people safe from the effects of radiation. On the other side was nuclear medicine, which hoped to harness the power of radiation to diagnose and treat disease. As the country was swept into the war, research shifted from the medical applications of radiation to the effects of radiation on the body and the tools and techniques needed to protect the Manhattan Project workers.

The Manhattan Project leaders knew that they were about to create a new and intense source of radiation, and thus efforts into understanding its effects were increased. A group was formed at the University of Chicago under Ernest Wollan, a cosmic ray physicist, to study and protect their coworkers from radiation. The term “health physics” arose partly out of the secrecy of the project and partly due to the nature of those employed—it was mostly physicists working on problems relating to health.

Under the direction of Stafford Warren, the medical director of the Manhattan Project, a wider program in health physics began. Each Manhattan Project site demanded a different focus, but workers at each site were united in their efforts to keep the workers safe as they raced to build the atomic bomb.

In Chicago, Robert Stone searched for a biological indicator that would help quantify the amount of radiation a person had absorbed. While low white blood cell counts were often suggestive of overdose, they were not a reliable measure of radiation exposure because they varied widely from person to person. No other biological measurement was found, however, that could more accurately indicate the amount of radiation a person absorbed. Therefore, blood tests remained the best tool for investigating possible radiation overdoses.

Herbert Parker worked on new units of radiation measurement, culminating in the rem unit. Unlike the roentgen, which measures the ability of an x-ray to ionize air, the rem is based on biological impact. At the same time, Wollan and his team worked on developing improved radiation measurement tools, including film badges, a device that measured fast-moving neutrons, and fiber dosimeters that indicated on a scale using a small fiber the amount of dose administered.

Wollan and his team—which included Parker, Karl Morgan, Carl Gamertsfelder, and Jim Hart—then moved to Oak Ridge, Tennessee. While Wollan moved to the physics division to study neutron diffraction, the rest of the team got to work setting up a program in radiation safety. This program in health physics emphasized the use of film badges and a system of behavior to help decrease risk. Morgan began small studies to further understand the effects of plutonium which, up to that point, had only existed in the world in microscopic quantities. Morgan served as the director of health physics at Oak Ridge from 1944 until 1972.

While Morgan stayed at Oak Ridge, Parker, Gamertsfelder, and Hart went to Hanford in 1944 to organize its radiation protection program. Parker would go on to stay at Hanford until his death in 1984. At Hanford, health physics research focused on the environmental consequences of radioactive materials. This included classic studies of the diffusion of radioactive products into the atmosphere, soil, and water. The Columbia River became the site of many aquatic studies, including research into local fish populations. 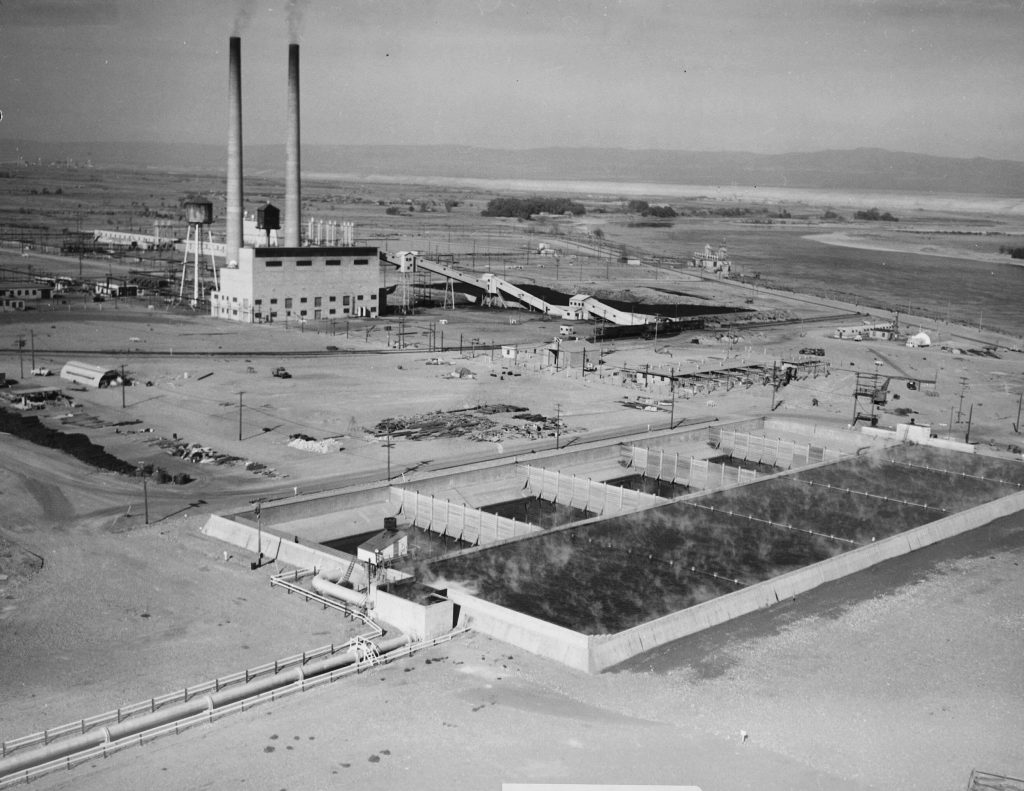 During the Manhattan Project, three reactors were built at Hanford along the Columbia River. Tens of thousands of gallons of water was pumped from the river per minute to cool the uranium slugs. After passing through the reactors, this heated water—which contained a number of chemicals as well as a small amount of activation products, or materials in the water made radioactive after colliding with neutrons emitted from the reactor—was stored in large basins before being returned to the river. The uranium fuel was stored underground and left untouched for a period of time before being transported to reprocessing plants, where the plutonium was separated from the uranium and other fission products. Reprocessing created a large amount of waste—about 85% of the radioactive waste produced during the manufacture of materials for the atomic bombs came from these plants.

While many procedures were put in place to handle this waste, proper containment proved difficult, and many scientists underestimated the effects radiation would have on the surrounding environment. While some radioactive material was stored or decontaminated, some leaked into the areas surrounding the Manhattan Project sites. The Columbia River in Hanford and the Clinch River in Tennessee, in particular, received high amounts of radioactive materials. Many of the records of this contamination surfaced only recently. Studies into the effects of radiation on these environments have made the sites important centers for ecological research.

Louis Hempelmann, a young doctor from St. Louis, was put in charge of the health and safety of the Los Alamos site. Hempelmann’s main duty was to regularly take blood samples of the workers. In this task, Hempelmann was aided by a small team, including Enrico Fermi’s wife Laura, physicist Lawrence Litz’s wife Evelyne, and Floy Agnes Lee. Los Alamos was also the site of a handful of accidents involving radioactivity. On August 1, 1944, a young chemist named Donald Mastick accidentally swallowed about ten micrograms of plutonium—an extremely small amount that was nevertheless extremely dangerous. Hempelmann pumped Mastick’s stomach and washed out his mouth. Plutonium was still very scarce at that time, and afterwards Mastick had to recover the plutonium from these solutions himself. Two men, Harry Daghlian and Louis Slotin, died at Los Alamos after being exposed to lethal doses of radiation during criticality experiments.

The University of Rochester

Near the end of the war, a series of controversial medical tests using plutonium began. Eleven subjects were injected with plutonium in Rochester as part of a larger, nationwide experiment. Another six were injected with uranium. These human tests, which continued after the bombs were dropped, were undertaken in the hopes of understanding how quickly the human body expels plutonium and other radioactive materials and the extent of the damage radiation could cause from inside the body. These experiments remained a secret for decades.

Before the war ended, Manhattan Project scientists and physicians contemplated how to expand their work and continue the projects they started during the war. It became clear that the world was about to enter a nuclear age, and that there was still much left to be done. This research would not only protect people, but had the potential to produce new treatments and cures. After the war, a new era of medical research began, organized around the same principles as the Manhattan Project: unprecedented cooperation, scale, and results.